SEOUL, Sept. 9 (Yonhap) -- A ruling party lawmaker has come under fire for a leaked mobile messenger conversation that opposition lawmakers claimed corroborates the ruling party's censorship of the press.

Press cameras captured a screenshot of a Telegram conversation between Rep. Yoon Young-chan of the Democratic Party (DP) and an unknown person during a National Assembly plenary meeting Tuesday while a speech by the opposition People Power Party's floor leader, Rep. Joo Ho-young, was under way.

In the leaked conversation, the lawmaker pounced on the internet portal Daum for placing news on Joo's speech critical of the Moon administration on its main news page.

"Complain strongly to Kakao about this," Yoon instructed the other side, referring to the company Kakao Corp., which operates Daum. "Kakao is going too far. Call them in," Yoon was seen saying.

A controversy immediately flared up from the opposition side, with Rep. Kim Eun-hye, the chief spokesperson for the main opposition People Power Party (PPP), accusing Yoon of "trying to muzzle the internet portal" and oppressing the freedom of the press.

The party's floor spokesperson, Rep. Bae Hyun-jin, chimed in, saying, "So the (alleged) news censorship (by the ruling bloc) has been real." The minor Justice Party also "deplored" the conversation.

PPP lawmakers on the National Assembly's Science, ICT, Broadcasting and Communications Committee also demanded Yoon, a member of the committee, resign from his seat.

Yoon hit back and said he only questioned Daum's fairness because the corresponding parliamentary speech by DP leader Rep. Lee Nak-yon on Monday was not posted on the main news page.

He noted that he only instructed his own office to inquire about the reason, expressing regrets over what he called the oppositions' "politicization" of the issue.

As the controversy brewed, Kakao came forward to clear itself of any suspicion. It said artificial intelligence has been entirely in charge of news compilation on Daum since 2015, and no one is allowed to influence the edit. 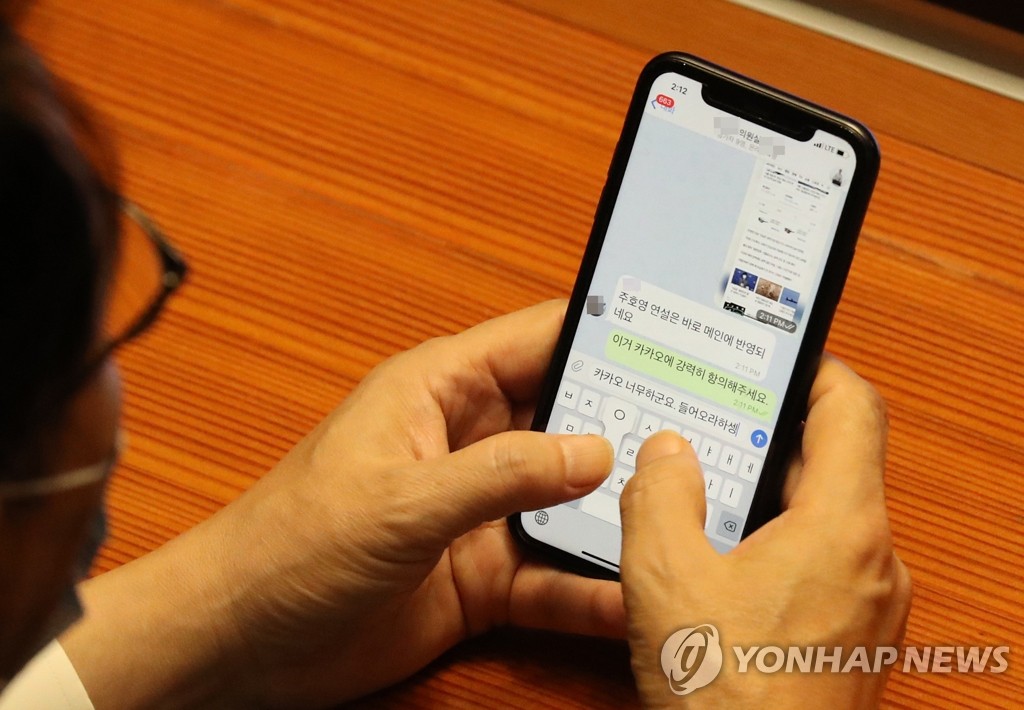