The value of bonds issued in the country came to 67.7 trillion won (US$56.9 billion) last month, down 7.2 percent from a month earlier, according to the data from the Korea Financial Investment Association.

Sales of state bonds climbed 6.8 percent, but the issuance of financial and corporate bonds sank 10 percent and 33.9 percent, respectively.

The decline was attributed to low demand in the off-season and preemptive corporate efforts to raise funds before July. 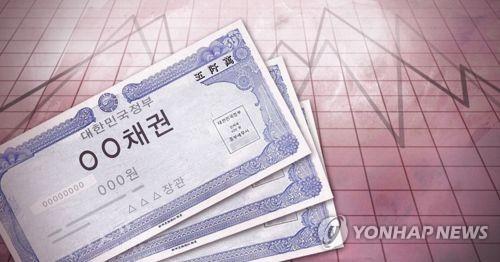 Foreign investors bought a net 4.1 trillion won worth of South Korean bonds in August, down 34.5 percent from the prior month. Foreign holdings of local bonds totaled 150.9 trillion won as of the end of August, up 800 billion won from a month earlier.

Despite the central bank's key rate freeze, South Korean bond yields rose sharply in August from the previous month due to worries over the resurgence of coronavirus infections and other negative factors.

The yield on three-year government bonds stood at 0.94 percent as of end-August, up 14.4 basis points, with that on five-year state bonds rising 17.9 basis points to 1.21 percent.

In August, the Bank of Korea froze the benchmark seven-day repo rate at 0.5 percent for the second straight occasion amid a sharp economic slowdown due to the coronavirus outbreak.
(END)