The streaming giant and YG Entertainment, the band's agency, said Wednesday "BLACKPINK: Light Up the Sky," the first Netflix film about a South Korean music band, will premiere Oct. 14.

The "all-access" movie follows the quartet, who debuted in 2016, from their time as trainees to one of the top K-pop groups with performances, unrevealed video footage, exclusive interviews and off-stage lives of the members -- Jisoo, Jennie, Rose, and Lisa.

The film is directed by Caroline Suh, who produced the Netflix documentary "Salt Fat Acid Heat."

"Director Caroline Suh's trusted relationship with Jisoo, Jennie, Rose, and Lisa offers organic and honest moments that give viewers an authentic inside look into the lives of BLACKPINK, as well as the dedication and grueling preparation each member puts into every hit song, history-making performance and sold-out arena tour," Netflix's Adam Del Deo, vice president of documentary features, said in a statement.

YG Entertainment said the film will show how the quartet creates synergy and converges four lives into one, through their album-making process and interviews.

"Some K-pop groups have been dealt with in 'Explained' series, but this is the first Netflix documentary shedding light on a single K-pop artist," YG Entertainment said.

The news came as BLACKPINK's new single "Ice Cream," a prelease song for its album in October, with Selena Gomez as a guest singer, made its Billboard Hot 100 debut at No. 13 for this week, the highest position ever by a K-pop girl group. 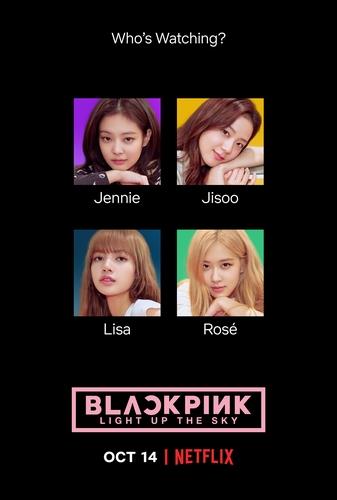