GENEVA, Sept. 9 (Yonhap) -- South Korean Trade Minister Yoo Myung-hee departed Geneva for Paris Wednesday as she drums up support for her bid to become the next head of the World Trade Organization (WTO).

"In the French capital, she is scheduled to meet with key figures to secure their support in the selection process," an insider said without providing details.

The minister is expected to remain in Paris till Friday.

Yoo traveled to Switzerland late last month and has been engaged in talks with representatives from various countries to outline her goals for the international organization and positive changes she can make down the road, an official source said.

Yoo has said that with her extensive experience as a trade negotiator, she is best qualified to head the WTO and help promote multinational trade arrangements. 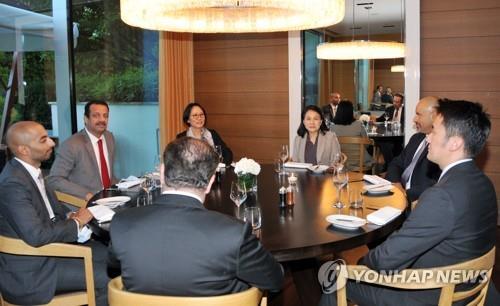 Her latest visit to Geneva, where the WTO is based, is the second of its kind, after she spent time here in July. The earlier trip came after Yoo formally announced her bid for the top post at the international trade organization.

The WTO said that it will hold the first round of discussions on Sept. 7-16 to trim the number of hopefuls from the current eight to five. That will be followed by another round of reviews where another three will be dropped, leaving two contenders.

The final decision on who will lead the organization is expected to be reached in early November.
(END)