WASHINGTON, Sept. 9 (Yonhap) -- North Korea appears to be ready to resume its nuclear and weapons testing in the near future, a former U.S. intelligence official said Wednesday, stressing the need for "stronger" incentives or punishment for the communist state.

"Another big element we need to think about is that additional weapons testing is probably just a matter of time," said Markus Garlauskas, a former intelligence officer for North Korea at the Office of the Director of National Intelligence.

During a virtual seminar, titled "A New Direction for U.S. Policy on North Korea," he said that North Korean Kim Jong-un has personally stated that the North is no longer bound by its earlier pledges not to test nuclear and intercontinental ballistic missiles (ICBMs). 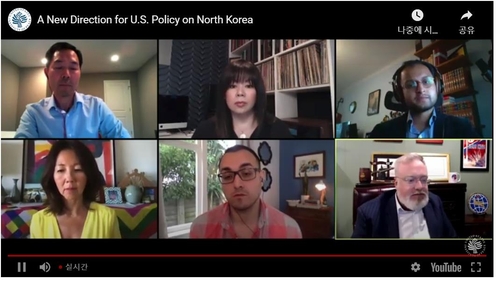 "North Korean state media has been very clear that Kim has threatened that there's going to be a new strategic weapon reveal, and that he no longer feels bound by his previous pledges not to test ICBMs and nuclear weapons," Garlauskas told the webinar hosted by the Washington-based U.S. Institute for Peace.

"And so if you take all those assessments, it paints a pretty, pretty unpleasant picture," he added.

North Korea has maintained its moratorium on nuclear and ICBM testing since late 2017, when it staged its sixth and last nuclear test.

Still, many are beginning to suspect the communist state may soon resume its weapons testing amid a deadlock in denuclearization talks with the United States.

Kim held two bilateral summits with U.S. President Donald Trump -- in June 2018 and February 2019 -- but their talks have stalled since the last summit ended without a deal, largely over how to sequence the North's denuclearization with U.S. concessions.

"I think a pragmatic approach should focus on preventing further weapons testing before entertaining anything more ambitious in terms of full denuclearization rollback or even a more ambitious sort of arms control," he said.

Ideally, he said, the U.S. could seek a formal agreement with Pyongyang to have the regime recommit to its weapons testing ban.

"But if not, if you can't get to that agreement, then just some stronger incentives not to test and some stronger, more credible punishments if testing does place, I think, would be a very helpful policy approach," he added.

Garlauskas argued such efforts may provide a window of opportunity for the U.S. to test North Korean intentions and also give diplomacy another chance.

And should North Korea breach the agreement on weapons testing, it would do so in a way that "looks much more like a clear violation" that would help justify a tougher and more unified approach to punish the North, he said.

Experts have talked about the possibility of the North unveiling a new strategic weapon near the 75th anniversary of the founding of its ruling Workers Party on Oct. 10.

The Center for Strategic and International Studies (CSIS) think tank said Wednesday that a satellite image of North Korea's main submarine shipyard may indicate preparations for a test of a submarine-launched ballistic missile.

"A satellite image of the Sinpo South Shipyard acquired on September 9, 2020 -- as the remains of typhoon Haishen struck the Korean Peninsula -- continues to show activity within, and adjacent to, the secure boat basin," the CSIS said in a report posted on its Beyond Parallel website.

"This activity remains suggestive, but not conclusive, of preparations for an upcoming test of a Pukguksong-3 submarine launched ballistic missile from the submersible test stand barge based here," it added.

The U.S. think tank first reported suspicious activities at the North Korean shipyard in northeastern Sinpo on Friday, highlighting the presence of vessels that resemble those used to tow submersible test stand barges out to sea for test launches.

"A vessel similar in size and layout to the ones previously observed prior to earlier tests remains within the secure boat basin," it said in its latest report.