The Shanghai Containerized Freight Index, a barometer of global freight rates, came to 1320.8 on Friday, up a whopping 61.4 percent from the yearly low of 818.6 in April.

Freight rates on routes between China and the east coast of North America stood at US$4,538 per forty-foot equivalent unit (FEU). Those on routes to North America's west coast reached $3,758.

Rates on those routes have more than doubled over the past three months, with freight rates for routes to North America's east cost marking the highest level since 2009. 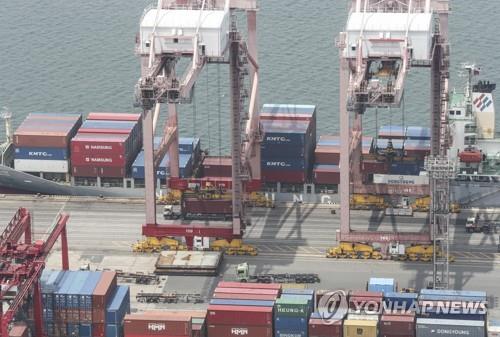 Industry officials also said major shippers have yet to restore their container fleets to pre-coronavirus levels after slashing the number of vessels due to a virus-caused tumble in global trade.

On top of that, South Korean exporters have been hit by global shipping companies' focus on China, whose economy has been picking up after the fallout from the coronavirus pandemic.

"Major shippers are allocating more container vessels to China to meet growing demand there, while cutting the number of ships for South Korean companies," an industry watcher said.

An exporting company official said a shortage of container ships for South Korean companies is resulting in delayed exports and production at their overseas factories.