SEOUL, Sept. 10 (Yonhap) -- Foreign Minister Kang Kyung-wha has called for international support for an early resumption of dialogue with North Korea and renewed South Korea's "firm" will to push for inter-Korean cooperation at a regional forum, her office said Thursday.

On Wednesday, Kang made the call during a video-linked foreign ministerial session of the East Asia Summit (EAS) that involves the 10-member Association of Southeast Asian Nations, South Korea, China, Japan, the United States, Russia, Australia, New Zealand and India.

Other participants noted the importance of dialogue with the North for denuclearization and peace on the Korean Peninsula but mentioned the need for the enforcement of U.N. Security Council sanctions against Pyongyang.

"For the faithful implementation of the agreements and the early resumption of dialogue, Minister Kang called for support from the international community, including the EAS," the foreign ministry said, referring to the agreements from two inter-Korean summits in 2018 and the first-ever U.S.-North Korea summit in the same year.

"As the nontraditional security threats such as COVID-19 have taken prominence, the minister explained our government's efforts and firm will to help improve the livelihoods of North Korean people and achieve progress in inter-Korean relations through cross-border cooperation on quarantines, heath care and medicine, and humanitarian sectors," it added in the press release. 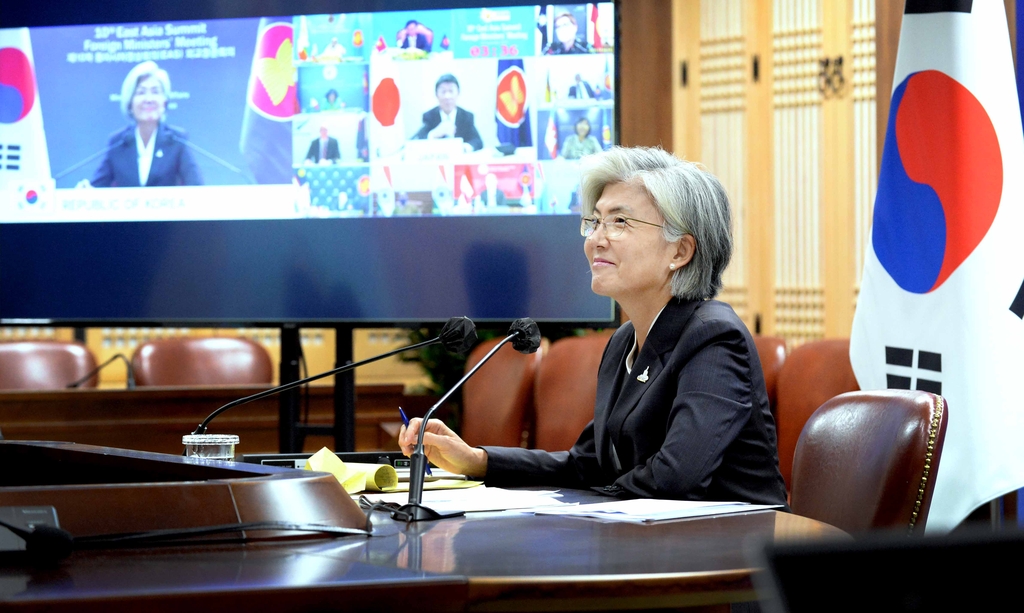 Seoul has been pushing to bring dialogue with Pyongyang back on track, as the deadlock in nuclear talks between the U.S. and the North has thrown into doubt the South's push for cross-border rapprochement.

At the forum, Kang also stressed the importance of freedom of navigation and overflights in the South China Sea, and called for a dialogue-based peaceful resolution of territorial disputes in the strategic waterway.

"Minister Kang mentioned that peace and stability in the South China Sea is crucial for regional prosperity," the ministry said.

Kang also voiced expectations that countries' commitments to preventing the escalation of tensions and militarization of the sea will be enforced, and that consultations on a code of conduct in the South China Sea will proceed in accordance with the international law.

On the same day, Kang participated in other videoconferences involving ASEAN, where she stressed the importance of multilateral cooperation, particularly in fighting the COVID-19 pandemic.