SEOUL, Sept. 10 (Yonhap) -- K-pop superstar BTS topped the Billboard Artist 100 and Social 50 charts as its new single "Dynamite" scored its second week at No. 1 on the Billboard Hot 100.

The boy band rose to the top of the chart last week when "Dynamite" debuted on top of the Billboard Hot 100 main singles chart.

It is the band's eighth time ranking first place on the Artist 100 chart, which kicked off in 2014. BTS claimed the position the most number of times for any duo or group and the 10th most among all artists.

BTS also stayed atop the Social 50 chart, which ranks the most popular artists on social media across the world, for 195 weeks in a row.

Meanwhile, the K-pop group's previous albums are also keeping a long-term presence on Billboard's main albums chart, Billboard 200. "Map of the Soul: 7," a full-length album released in February, ranked at No. 52, and "Love Yourself: Answer," a repackaged album dropped in 2018, was at No. 148 for the week of Sept. 12.

The band's latest megahit single "Dynamite" came in at No. 1 on the Digital Song Sales chart and ninth on the Streaming Songs chart. 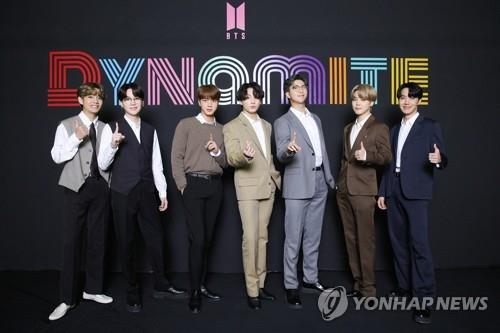