SEOUL, Sept. 10 (Yonhap) -- Doctors and the government are at odds over whether to give medical students another opportunity to take the state medical licensing exam, another sticking point to be addressed, as trainee doctors returned to work, ending a nationwide strike over a new medical reform plan.

Most trainee doctors, such as interns and residents, at general hospitals ended their collective action and returned to work since earlier this week, following an agreement with the government to put the reform plan on hold.

However, doctors have continued to demand that the government allow medical students to retake the medical licensing exam that began Tuesday. About 90 percent of test-takers have boycotted the state exam in protest of the plan. 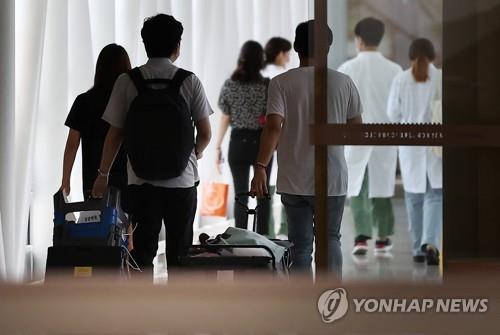 The Medical Professors Association of Korea, representing professor-level doctors at general hospitals, on Thursday urged the government to hold the exam once more in accordance with the agreement.

"There will be more big problems both in the short and long term if the exam is not held properly," the association said in a statement. "We will further act with medical students and young doctors if the agreement is not properly carried out."

The Korean Medical Association (KMA), the country's largest doctors' association representing some 130,000 doctors, also earlier pressed the government to ensure medical students who had withdrawn their applications take the exam.

The government, however, reiterated its earlier stance that the agreement is irrelevant with the exam, saying there is little need to discuss an additional chance for the exam.

"The agreement between the KMA and the government is already open to the public and does not include an additional exam for the medical students," health ministry spokesman Sohn Young-rae said in a briefing.

On Friday, the KMA agreed with the ruling party to end its nationwide strike after the government backed down and promised to put the medical reform plan on hold in a joint effort to overcome the novel coronavirus pandemic.