Rightist civic groups are seeking to stage anti-government demonstrations in central Seoul on Oct. 3, the National Foundation Day, despite criticism that their rallies last month led to more than 550 new COVID-19 cases across the country.

Kim Chong-in, chief of the conservative opposition party, called for their restraint, citing the risk of such events further spreading the coronavirus.

"This is a critical moment that will decide whether we unite and overcome COVID-19 or fall apart," he said during a meeting of the party leadership panel.

"I ask you to postpone the rallies and join the people (in the fight against the virus)," he said. 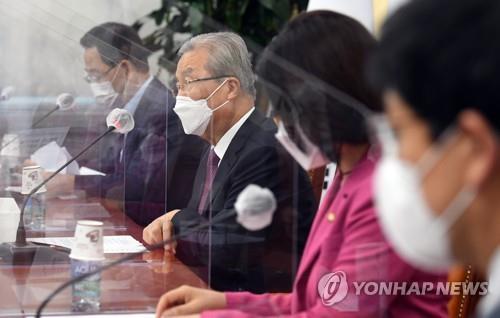 Seven groups have reported plans to hold a total of 18 rallies, each involving at least 10 people, in central parts of the capital on the day commemorating the proclamation of the Korean alphabet by King Sejong of the Joseon Dynasty in 1446.

Police have been notifying the groups that their events are not allowed in light of coronavirus precautions, officials said.

The party has recently distanced itself from ultraright civic and religious groups that led mass protests in Gwanghwamun, central Seoul, on the Aug. 15 Liberation Day.

A total of 557 cases across the country have been linked to the demonstrations, the Korea Centers for Disease Control and Prevention said Thursday.