SEOUL, Sept. 10 (Yonhap) -- The Cabinet approved an extra budget worth 7.8 trillion won (US$6.5 billion) Thursday allocated to cushion the economic fallout from the resurgence of COVID-19 cases and plans to submit it to the National Assembly for approval this week.

The government proposal for its fourth supplementary budget this year to fight the COVID-19 pandemic passed the Cabinet meeting chaired by Prime Minister Chung Sye-kyun.

President Moon Jae-in announced the structure of the fourth extra budget in an emergency economic council meeting earlier in the day. Some 3.8 trillion won of the budget will go to 3.77 million people gripped by the pandemic, including 3.2 trillion won to be distributed as stimulus cash handouts for 2.91 million small business owners and self-employed workers.

The government plans to submit the budget bill to the assembly Friday for approval.

Also approved in the Cabinet meeting was a revision of an anti-graft law, known as the Kim Young-ran Act, to temporarily raise the ceiling on the value of gifts allowed for public servants, teachers, journalists and other people whose work involves public service.

Under the revision, they can receive agricultural, marine or livestock products worth up to 200,000 won as work-related gifts, compared with the current ceiling of 100,000 won. The revision aims to support the agricultural, fishing and livestock industries during the COVID-19 resurgence.

The revision came into force Thursday and will remain effective till the end of the extended Chuseok holiday on Oct. 4.

The Cabinet also gave a nod to a plan to allow up to 50 percent of the country's total production of droplet-proof and surgical face masks to be exported, lifting its ban on those masks' outbound shipments. 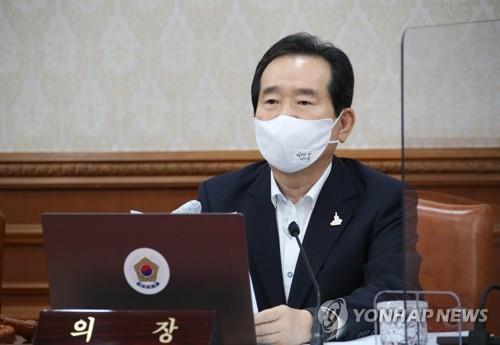