Lee's second term, which is set to begin on Friday, comes amid a series of stalled corporate sell-off deals, including how to normalize Asiana Airlines Inc.

Major property developer HDC Hyundai Development Co. had sought to acquire the country's second-biggest airline, but the 2.5 trillion-won (US$2.1 billion) deal appears likely to collapse due to differences over acquisition terms. 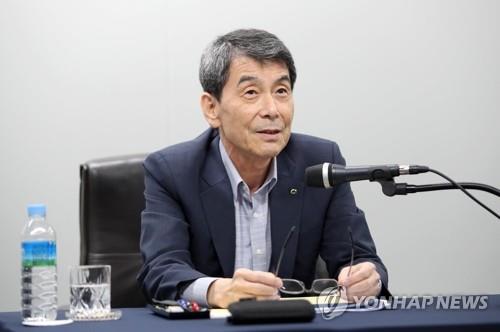 Lee met with HDC Chairman Chung Mong-gyu late last month and reportedly suggested massive financial support to save the deal from falling through.

But HDC once again demanded another round of due diligence on Asiana, which was already rejected by the creditors and Kumho Industrial.

Once the two sides announce the deal's collapse, Asiana is expected to be placed under the control of its creditors -- KDB and the Export-Import Bank of Korea (Eximbank) -- and undergo restructuring to find a new owner.

On Friday, ministers handling the Asiana deal and officials in charge of the state fund set up for the airline and other backbone industries are scheduled to have separate meetings.

KDB and Eximbank have extended a combined 3.3 trillion won to Asiana Airlines in the past two years to help the cash-strapped carrier stay afloat.