Choi reached the agreement during talks with U.S. Deputy Secretary of State Stephen Biegun in Washington. The two sides also agreed to commit themselves to moving forward the countries' long-stalled discussions on defense cost-sharing, Choi said.

"At the consultation, (the sides) agreed to newly establish a tentatively named 'Alliance Dialogue,' which would be a working-level consultation body between director-level officials from the two countries' foreign ministries," Choi said. 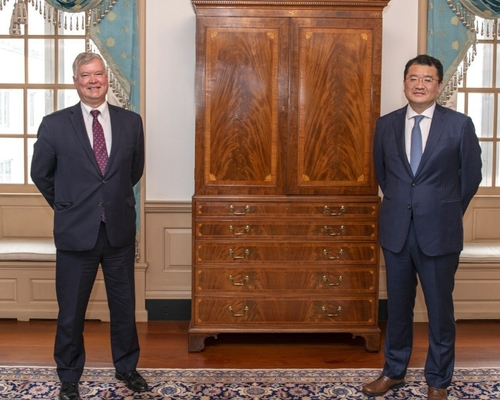 He said the new dialogue channel would be an extension of efforts to continue and enhance the countries' cooperation.

"You may see the move to constantly discuss alliance issues and notify each other through this director-level communication channel as part of such efforts," he told reporters in Washington.

His trip came about three weeks after he was appointed the first vice foreign minister. He previously served as a secretary at the National Security Office of the presidential office Cheong Wa Dae.

Choi said he and Biegun also agreed to work together to help move forward the stalled negotiations on the sharing of the upkeep cost of some 28,500 American troops stationed in South Korea.

South Korea has agreed to increase its burden-sharing by up to 13 percent this year from the US$870 million it paid under last year's agreement. Washington is said to be asking for $1.3 billion, which would mark a 50 percent hike from 2019.

"Regarding the defense cost-sharing, first of all, Deputy Secretary Biegun and I candidly exchanged our views on the defense-cost sharing negotiations that have been held for nearly a year," Choi said.

"As you know, the countries have chief negotiators and so the issue will not be negotiated at the vice ministerial level, but we agreed to help narrow the difference of views by closely discussing the issue as vice ministers so that there may be significant progress in talks between our negotiators," he added.

Choi said the two sides also agreed on the need to closely monitor and maintain stability on the Korean Peninsula, especially before and after the upcoming U.S. presidential election on Nov. 3.

"We agreed our foreign ministry and the U.S. State Department will closely work together to resume South-North Korea and North-U.S. dialogue at an early date," he said.

Choi's meeting with his U.S. counterpart also followed renewed U.S. calls for Seoul to take part in the so-called Quad Plus initiative, which the U.S. envisions as a NATO-like collective structure in the Indo-Pacific that partly aims to counter China's growing presence and aggression in the region.

Choi said he was not pressed on the issue and that an ally would never force a friend to choose sides.

Currently, the Indo-Pacific initiative has four member countries known as the Quad -- Australia, Japan, India and the U.S. -- but others remain reluctant to join largely because it may be seen as picking the U.S. over China.

Before heading to Washington, Choi insisted it would not mean choosing a side, even if his country decided to take part in the U.S.-led Indo-Pacific initiative in the future, noting that South Korea has a very close relationship with China economically.

Meanwhile, an official, who asked not to be identified, said the U.S. has reaffirmed its invitation for Seoul to take part in the next G-7 summit to be hosted by U.S. President Donald Trump.

Trump had suggested the idea of adding South Korea, along with Australia, India and Russia, to the current group of seven countries in late May.

The summit was originally set to be held in June but has been postponed until after the U.S. presidential election due to the COVID-19 pandemic.