SEOUL, Sept. 11 (Yonhap) -- The government plans to decide whether to ease the tougher social distancing requirements in Seoul and the broader capital area after watching the virus situation for one or two more days, Prime Minister Chung Sye-kyun said Friday.

"Keeping an eye on the virus situation for one or two (more) days, the government will determine its position on the future quarantine measures after hearing sufficient opinions from experts," the prime minister said in a regular government COVID-19 response meeting. "We still have time (for deliberation), although it's not enough."

Chung said the government is "deeply concerned" because the daily new infection tally has continued to stay well over the 100 threshold for more than a week despite the toughened distancing restrictions.

A hasty decision to ease the distancing level could trigger another resurgence and deal a heavier blow to the people, he added.

South Korea imposed the Level 2.5 social distancing requirements in the capital area on Aug. 30 and has extended it once to be effective till Sunday.

Under the toughened guidelines, restaurants can operate only until 9 p.m., and only takeaway and delivery are permitted between 9 p.m. to 5 a.m.

Only takeout or delivery is allowed at franchise coffee shops and bakeries.

South Korea's daily new virus tally has been in triple digits for nearly a month since Aug. 14, a resurgence attributable to cluster infections at a Protestant church in northern Seoul and mass anti-government protest rallies on Aug. 15.

The daily virus tally in recent months peaked at 441 cases on Aug. 27 and has since gradually slid to the 100 range. But the daily numbers have continued to stay over 100 for the past week, putting quarantine officials in limbo over whether to further extend the costly Level 2.5 social distancing.

The prime minister also urged citizens to refrain from returning to their hometowns during the extended traditional Chuseok holiday that begins on Sept. 30, to avert any infection risks. 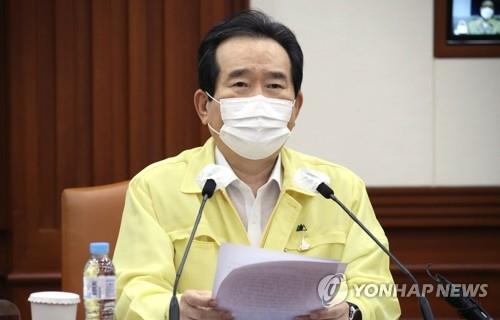 Keywords
#Level 2.5 social distancing in capital area
Issue Keywords
Most Liked
Most Saved
Most Viewed All Categories
Most Viewed More
Most Viewed Photos

Gov't to decide whether to ease social distancing after watching situation for 1 or 2 more days: PM

Gov't to decide whether to ease social distancing after watching situation for 1 or 2 more days: PM