BUCHEON, South Korea, Sept. 11 (Yonhap) -- A man on Friday received a prison sentence for hitting and injuring a child with his car, becoming the first driver to be punished after the laws mandating heavier punishment for car accidents within school zones came into force in March.

The Incheon District Court's Bucheon Branch sentenced the 39-year-old man to 1 1/2 years in prison for violating the so-called Min-sik's laws on road safety.

His girlfriend, only identified as a 26-year-old, was sentenced to a fine of 5 million won (US$4,206) for attempting to pretend to be the driver.

The prosecution detained and indicted the driver in August over a car crash involving a 7-year-old child who was crossing the street in a school zone in Gimpo, just northwest of Seoul, on April 6.

He was driving -- with a suspended driver's license -- faster than 40 kmh, over the speed limit of 30 kmh, when the accident happened.

"Had the defendant not violated the speed limit within the school zone, the accident would not have happened or become a minor fender bender," the court said. "The victim almost flew ten meters after the car hit him."

The court said that the defendant "deceived the victim and his family as if his girlfriend drove the car" and "hid his wrongdoing until it was revealed through closed-circuit TV footage."

The defendant's past criminal histories, including drunk driving, were factored in when sentencing, the court said.

For the girlfriend, it took into consideration that she had no criminal record, among other things.

Min-sik's laws were named after a nine-year-old boy who died in a car crash in September last year in front of an elementary school in Asan, some 85 kilometers south of Seoul.

They were designed to protect children in school zones, with the speed limit capped at 30 kmh or slower and various safety tools, such as speed cameras and speed bumps, put in place.

The laws require tougher punishment of up to life imprisonment when an accident leads to death. In case of injuries, a driver can be imprisoned for up to 15 years and fined a maximum of 30 million won. 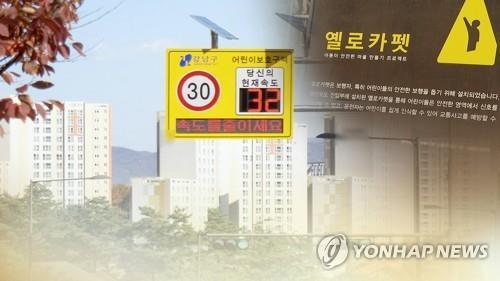