SEOUL, Sept. 11 (Yonhap) -- The government said Friday it will ban anti-government protest rallies planned by conservatives in central Seoul early next month, due to fears of coronavirus transmission.

Conservative activist groups critical of the Moon Jae-in government have vowed to hold 291 rallies in downtown Seoul on the occasion of the National Foundation Day, which falls on Oct. 3, despite criticism that their similar outdoor gatherings on the Aug. 15 Liberation Day have so far resulted in 557 new cases of COVID-19 nationwide. 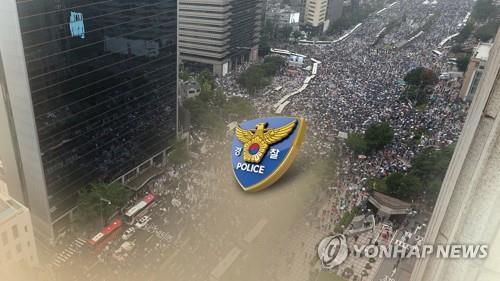 The National Police Agency (NPA) reported its decision to prohibit the Oct. 3 rallies and deal sternly with any violations of the infectious disease prevention law at a meeting of the Central Disaster and Safety Countermeasures Headquarters.

The NPA said it has issued no-assembly orders for 78 outdoor rallies reported to authorities to have more than 10 participants and take place within no-assembly zones.

Nine civic groups have declared plans to hold 32 rallies with more than 10 participants in the heart of Seoul on Oct. 3, and six of them hosted similar rallies on Aug. 15.

Authorities already banned gatherings in public squares in the city center, including Seoul Plaza and Gwanghwamun Square, in February as part of coronavirus measures, but they imposed few restrictions on rallies held elsewhere.

Beginning Aug. 21, the Seoul metropolitan government has enforced a ban on gatherings of more than 10 people in the capital as part of its strengthened measures to curb the recent surge in new coronavirus cases.

The NPA said it will continue to persuade civic groups not to hold outdoor rallies of more than 10 people, to help combat the COVID-19 pandemic.

"In the case of large-scale gatherings, the risk of coronavirus transmissions is very high, as slogan shouting and singing can easily generate saliva droplets and participants gathered from across the country have close contact with one another," Yoon Tae-ho, a senior health official, told reporters after the meeting of the central disaster countermeasures headquarters.

"Thus it is inevitable to prohibit such rallies to help stem the spread of the coronavirus."

Yoon said the government will swiftly take measures to disperse rally participants and respond strictly according to laws and principles if their organizers push ahead with the planned gatherings.