SEOUL, Sept. 12 (Yonhap) -- Foreign Minister Kang Kyung-wha called Saturday for Asia-Pacific countries to send a "unified message" for the resumption of dialogue with North Korea, renewing Seoul's resolve to forge ahead with efforts for lasting peace on the Korean Peninsula.

Speaking at the video-linked ASEAN Regional Forum (ARF), Kang also highlighted South Korea's push to improve inter-Korean ties through various projects for cross-border cooperation, which she called a "cornerstone" of peace on the peninsula.

"Minister Kang said that although it would be difficult to resolve the long-standing distrust on the Korean Peninsula in a short period of time, the peninsula issue can be settled only through sustained dialogue and cooperation," the foreign ministry said in a press release.

"The minister said she expects the ARF to send a unified message calling for a peaceful resolution of the issue thorough an early resumption of dialogue," it added. 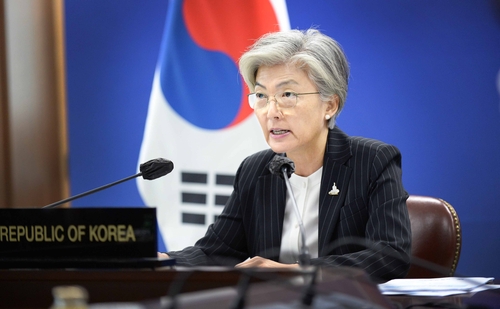 Participants in the ministerial session shared the view that peace on the peninsula is directly linked to peace and prosperity in the overall region. But they also mentioned the need to implement U.N. Security Council sanctions against the North.

The virtual ARF session brought together representatives from 27 countries, including the 10-member Association of Southeast Asian Nations, the United States, China and Japan.

North Korean Foreign Minister Ri Son-gwon did not participate, but An Kwang-il, a senior North Korean diplomat in Indonesia, attended the session instead.

An was said to have not made any direct remarks on Kang's call for dialogue.

On the South China Sea issue, Kang reiterated Seoul's position in support of the freedom of navigation and overflights in the strategically vital waterway, saying peace in the sea is particularly crucial at a time of the COVID-19 crisis.

Touching on the issue of refugees who fled to Bangladesh from Myanmar, Kang noted that Seoul is pushing for US$5.5 million in humanitarian aid for refugees this year.

In addition, the minister stressed the importance of the regional countries remaining vigilant against a series of nontraditional security challenges, such as terrorism and cyberincursions, noting increased cyberspace activity amid the pandemic.