SEOUL, Sept. 11 (Yonhap) -- Demand for Samsung Electronics Co.'s mobile application processor (AP), the Exynos, is likely to increase next year, analysts here said Friday, as the product will come out with upgraded performance and competitive prices.

Samsung ships about 150-200 million units of the Exynos chip a year, with the company being the dominant user. With its in-house developed mobile AP, the South Korean tech giant has been trying to catch up to the industry leader Qualcomm Technologies Inc., which dominates the market with its Snapdragon processors.

Local analysts said performance of the Exynos started to fall behind that of the Snapdragon from 2017 and that the gap has apparently widened further recently with the heating problem of its latest Exynos 990. 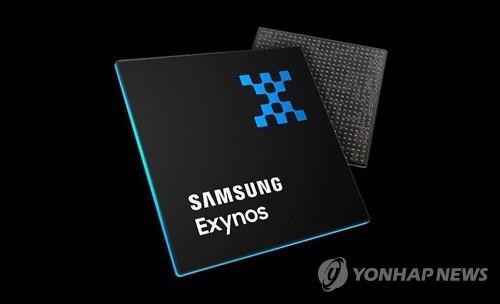 However, analysts said Samsung could see a rebound in its mobile AP business next year as its new Exynos chipset, reportedly developed under the codename "Olympus," will have improved performance and competitive prices.

"The next Exynos will be the first Samsung product to apply ARM-designed cores since it decided to ditch its custom central processor unit (CPU) development team, meaning it could reduce the performance gap with Qualcomm," said Kim Yang-jae, an analyst at KTB Investment & Securities.

Last year, Samsung decided to shut its development work on its custom Mongoose CPU, which was used for the Exynos series. Qualcomm, meanwhile, has been using CPU cores developed by British chip design firm ARM Ltd.

The rise of budget 5G smartphones will also make the new Exynos more attractive to phone manufacturers, according to Kim.

With that in mind, Kim added that Samsung, the world's largest smartphone maker, is likely to release more Exynos-powered devices in 2021.

For its flagship smartphones, Galaxy S and Galaxy Note series, Samsung has been using Exynos and Snapdragon processors equally, with its own chipset mainly applied in Asia and Qualcomm's product mostly selected for North America and Europe.

But due to performance and production issues of its latest Exynos chipset, the portion of Snapdragon-powered Samsung devices increased to about 80 percent this year, according to Kim.

Industry watchers said the use of Exynos processors will help Samsung reduce its production costs and its dependence on Qualcomm.

"For example, with the mmWave Qualcomm variant of the Galaxy Note 20 Ultra 5G, Samsung contributes to roughly half of the costs of the total components, whereas, for the Exynos variant, Samsung's share goes up to almost 70 percent," said Tom Kang, a research director at industry tracker Counterpoint Research.

U.S. restrictions on China's tech giant Huawei Technologies Co. will also serve as an opportunity for the Exynos, analysts said, because other Chinese brands that use the Samsung-made chipset are to increase their sales on the home turf.

Chinese phone makers like Oppo, Vivo and Xiaomi have been using Samsung's Exynos chipset for some of their smartphones. Huawei, meanwhile, uses its self-developed Kirin AP.

Samsung was the third-largest player in the mobile AP market last year, with a 14.1 percent share, according to Counterpoint Research.

Qualcomm and MediaTek were the top two players in the mobile AP market in 2019, taking 33.4 percent and 24.6 percent shares, respectively.