SEOUL, Sept. 11 (Yonhap) -- South Korea's foreign ministry on Friday called for its peacekeeping troops to continue their presence in Lebanon and South Sudan for its contribution to the global peace and other factors.

Whether to extend the mandate of Dongmyung Unit in Lebanon and Hanbit Unit in South Sudan was discussed during a meeting of related government agencies, including the defense and the public administration ministries.

"(The government) confirmed the need to extend their missions in consideration of relatively stable circumstances in the host nations and the high praise that our troops have received from the U.N. and the local governments," the ministry said in a statement.

Despite the global COVID-19 pandemic, thorough quarantine and prevention measures have been in place among the dispatched troops, which keeps potential risk to minimum levels, it added.

The 280-strong Dongmyung Unit has been operating as part of the U.N. force in the conflict-ridden country since 2007. Hanbit Unit has stationed in the war-torn African country on peacekeeping missions.

The extension of the deployment is subject to parliamentary consent on a yearly basis.

During the meeting, the government also checked preparations for the U.N. Peacekeeping Ministerial Conference slated to take place in South Korea next year, the ministry said.

Seoul plans to invite some 1,300 people from about 150 countries across the world to explore ways to strengthen technological and medical capabilities to enhance U.N. peace operations, according to the ministry. 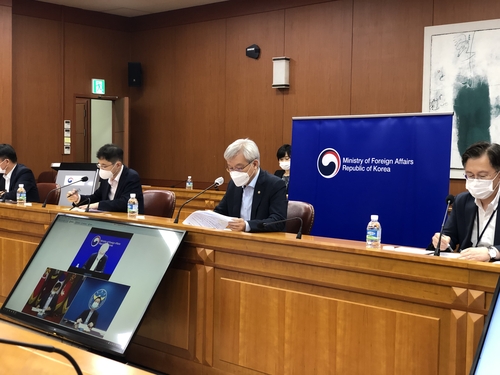