SEOUL, Sept. 13 (Yonhap) -- As the release from prison of one of South Korea's most notorious child rapist approaches, lawmakers of the ruling Democratic Party (DP) are working to propose multiple bills aimed at preventing convicts from recommitting such sexual crimes.

Cho Du-sun, 69, is set to be freed from prison on Dec. 13 after serving a 12-year term for kidnapping and raping an 8-year-old girl in a church bathroom in Ansan, 42 kilometers southwest of Seoul, in December 2008. The victim sustained severe injuries.

His penalty has sparked huge criticism among South Koreans that the country's judicial authority is lenient on child sex offenders and overall sexual criminals.

Nearly 20,000 people have supported a petition to block Cho's release, posted on the website of the presidential office Cheong Wa Dae, as of Sunday.

Rep. Kim Kyung-hyup said Friday he has tabled a bill that will broaden the range of sex offenders subject to identity disclosure under the Act on the Protection of Children and Juveniles against Sexual Abuse.

Under the current law, which came into force in 2010, people can check detailed addresses of sexual offenders released from prison, but for those who had committed crimes before the implementation of the law, such as Cho, only limited information is disclosed to the public.

In August, Rep. Kim Young-ho proposed a bill seeking a life sentence for convicts who sexually offend children under the age of 13 and permanently segregating them from society. The bill requires the court to respectively put second offenders behind bars for life, prohibiting them from parole.

"The key is to increase the penalty (on child sex offenders) and beef up protection measures for the victims," she wrote on her Facebook page, emphasizing she will try to win the parliamentary passage of the bill before Cho's release. 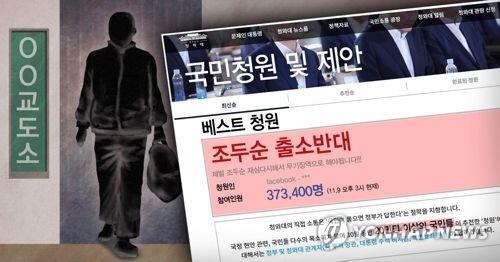