WASHINGTON, Sept. 11 (Yonhap) -- South Korea and the United States continue to move toward the transition of wartime operational control (OPCON) of troops back to Seoul and the issue will be discussed again at their annual defense ministerial meeting, the U.S. Department of Defense said Friday.

"Delegation heads affirmed the progress made in preparation for eventual wartime OPCON transition," the department said in a joint press statement for the Korea-U.S. Integrated Defense Dialogue, held Wednesday and Thursday. 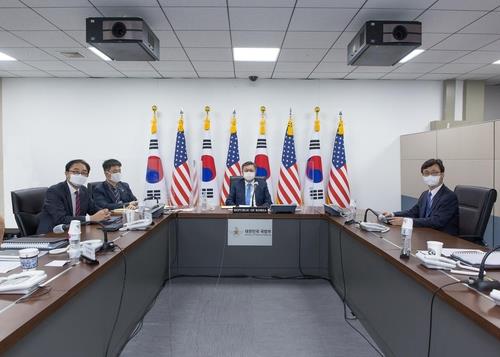 Seoul earlier said the OPCON transition was one of agenda items for the talks and that the two sides agreed their combined command post training held last month was a "step to specify conditions to evaluate a Full Operational Capability (FOC)."

The joint statement, released by the defense department, said the sides have agreed to each produce a progress report on the envisioned OPCON transition by the start of their annual ministerial defense talks, known as the Security Consultative Meeting (SCM). Schedules for this year's SCM, which will be the 52nd of its kind, have not yet been released.

"Both sides recognized the importance of the ROK forces' acquisition of critical military capabilities and committed to continue joint assessments through meetings of the special Permanent Military Committee (SPMC) to ensure a successful outcome. Both sides will provide a progress report on COTP (condition-based OPCON transition plan) requirements and discuss next steps at the SCM later this year," said the statement.

Earlier this week, Gen. Robert Abrams, commander of U.S. Forces Korea (USFK) and the Combined Forces Command, said the allies made more progress in 2019 than they had in the previous three years toward the OPCON transition, and that their goal has not changed.

"The commitment that we have is that there's no movement of the goalposts," he has said.

"As a matter of policy, of course, we fully support a ROK four-star (general) commanding the wartime forces," he said, noting the U.S. has "only 28,500" troops stationed in South Korea.

The participants at this week's bilateral defense dialogue also highlighted the importance of the Korea-U.S. alliance to peace and security in Korean Peninsula, as well as the Northeast Asian region.

"The two sides also committed to continue bilateral security cooperation including senior-level policy consultations, information sharing, and personnel exchanges to promote peace and stability on the Korean Peninsula and throughout Northeast Asia," the joint statement said.