Kim inspected the reconstruction site of the flood-ravaged Taechong-ri area in Unpha County and "acquainted himself with the progress and plan of the reconstruction," the official Korean Central News Agency (KCNA) said.

It was the second time in about a month that Kim has visited the village. The previous visit came in early August after torrential rains led to the breaking of a levee and left more than 900 homes flooded or destroyed and 600 hectares of rice fields inundated.

The trip was seen as part of efforts by Kim to highlight his image as a leader caring for the livelihoods of ordinary people. During last month's visit, Kim ordered officials to send his special stock of grain to the flood victims and facilitate the use of necessary supplies.

On Saturday, the KCNA said Kim expressed his happiness with the progress of the recovery efforts.

"Such a village that has taken its shape as a fairyland within a short period of merely over 30 days is a miracle which can be created by only the service personnel of the Korean People's Army (KPA)," Kim was quoted as saying.

Kim also called on officials and workers in the agricultural field to make "redoubled efforts to minimize the damage to the crops and increase the yield in a consistent and responsible way."

Officials were "immensely encouraged" by Kim's field guidance to the reconstruction site and vowed once again to finish the reconstruction at the highest level by the founding anniversary of the Worker's Party on Oct. 10, the KCNA said.

"Our Party has faced trouble and distress at the great damage caused by the recent series of heavy rain and typhoons but it will readily face the trouble and will take every possible measure for the sake of the great people and repay their great trust without fail," Kim was quoted as saying.

Kim has made field visits to the flood-hit regions of Hwanghae and Hamgyong provinces. Last week, he presided over an enlarged meeting of the Central Military Commission of the ruling Workers' Party to discuss damage in an eastern mining region in the country's eastern South Hamgyong Province from Typhoon Maysak. 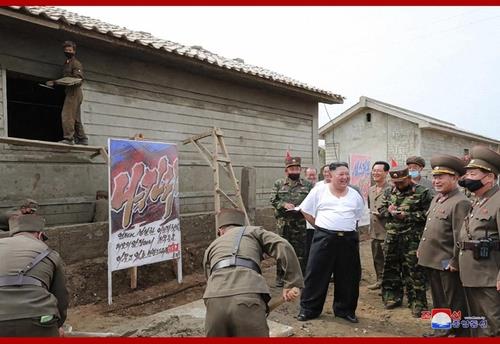 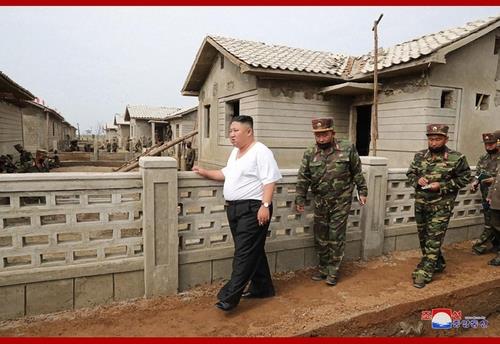