(ATTN: UPDATES with eased restrictions on commercial and religious facilities in last 4 paras)

DAEJEON, Sept. 12 (Yonhap) -- Citizens in Daejeon, a central city about 150 kilometers south of Seoul, are getting restless as authorities announced Saturday a chain of coronavirus transmissions originating from a health care product business forum has infected 54 people so far.

Daejeon's latest cluster infection began Aug. 25, when a Seoul resident infected with COVID-19 hosted the forum on health care goods at a building in the In-dong district in the city's Dong Ward. 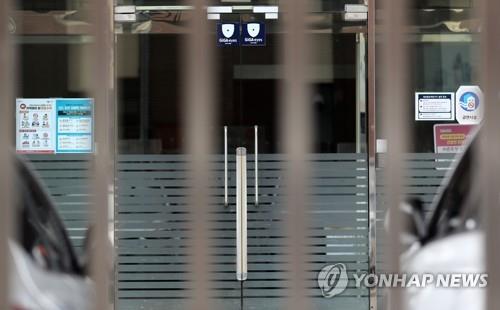 A Daejeon woman in her 50s, codenamed Daejeon 293rd Patient, contracted the coronavirus from the Seoul resident and has since spread the virus to 28 other people, including her family members and acquaintances, according to municipal health authorities.

Soon after the business forum, the woman, a resident of Gayang-dong, Dong Ward, met with a number of family members and acquaintances, infecting six of them.

One of her infected acquaintances, identified only as a man in his 60s, visited a restaurant in Gayang-dong later, triggering a chain of coronavirus transmissions in the local community, the authorities explained.

They noted it is regrettable that the man codenamed Daejeon 311th Patient had visited the Gayang-dong restaurant twice, on Aug. 31 and Sept. 1, for 20 minutes each time despite showing symptoms, such as phlegm and loss of taste.

The coronavirus then jumped from the 311th patient to as many as 19 people, including the restaurant's owner and a middle school student.

"Quarantine officials are trying to administer coronavirus tests for anybody who might have come into contact with the confirmed patients as swiftly as possible," a municipal official said. "But it's frustrating that the speed the coronavirus is spreading is faster than the speed of coronavirus tests."

Meanwhile, the municipality of Daejeon announced it will slightly ease business restrictions on commercial and religious facilities beginning next week.

Under the eased guidelines, nine types of businesses, including karaoke establishments, bars and indoor sports facilities, will be allowed to remain open until 1 a.m., beginning Monday, on condition that quarantine rules, such as wearing masks and electronic entry registration, are strictly observed.

But those facilities will still be banned from operating from 1 a.m. to 5 a.m.

Starting Sunday, the city's religious facilities will be allowed to resume in-person worship services attended by fewer than 50 people, the municipality said. Except the regular worship services, other religious gatherings and events, such as retreats and group meals, will still be prohibited.