According to the officials, the navies of South Korea, the United States, Japan and Australia are engaged in the three-day joint maritime exercise, Pacific Vanguard, in waters near Guam, scheduled to continue through Sunday.

The South Korean Navy has dispatched the 7,600-ton Aegis destroyer Seoae Ryu Sung-ryong and the 4,400-ton Chungmugong Yi Sun-shin to the exercise.

Joining from the U.S. were an Arleigh Burke-class guided missile destroyer, DDG-97, alongside a replenishment oiler and a submarine.

During the three-day exercise, the navies will engage in a range of drills, including an anti-submarine operation and a simulated battle.

Military officials said the Navy's participation in the latest Pacific Vanguard, the third of its kind since being launched last year, was requested by the U.S. side.

Before Pacific Vanguard, the four nations' navies also took part in exercises together in Hawaii for the biannual Rim of the Pacific exercise (RIMPAC) from Aug. 17-31 and an additional maritime drill near Guam on Wednesday and Thursday, the officials said. 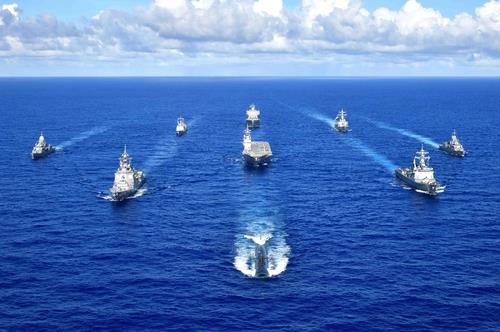