SEOUL, Sept. 14 (Yonhap) -- As Yoshihide Suga, a key loyalist of Japanese Prime Minister Shinzo Abe, is poised to succeed the hawkish leader, Tokyo is likely to stay the course in its hard-line stance on Seoul rather than seeking an immediate policy shift, analysts said Monday.

Chief Cabinet Secretary Suga won the ruling Liberal Democratic Party (LDP)'s leadership contest and is expected to be endorsed as new premier in a parliamentary vote slated for Wednesday. Abe announced his surprise decision to step down due to ill health last month.

Suga's election came after he garnered crucial support from five of the governing party's seven factions, many favoring policy continuity, in a reminder of the intricate political dynamics that make it difficult for a new leader to push for a drastic policy change.

Suga could seek to call a snap general election to tighten his power grip and secure a stronger public mandate for his own brand of policy, but the imperative to rally right-wing voters for a win may keep him from drifting far away from Abe's conservative agenda, analysts said.

The leadership change in Japan comes in the midst of tensions between Seoul and Tokyo over trade and wartime history, which have stoked concerns over their failure to step up cooperation to meet shared challenges, such as North Korea's nuclear and missile threats.

"In the broad scheme of things, there may not be a big policy change under Suga, who was once a key member of the Japan Conference," Nam Chang-hee, a professor of international politics at Inha University, said, referring to Japan's largest ultraconservative group.

"Given that the Suga administration will operate within the LDP power dynamics, it may not be easy for him to independently push for policies of his own color immediately," he added.

During his campaign for the ruling party chief post, Suga hinted at his desire to inherit Abe's policies ranging from the "Abenomics" of fiscal and monetary stimulus and structural reforms to the security priority on the U.S.-Japan alliance.

During an election debate on Saturday, Suga said that he will "consult" with Abe on foreign policy while casting the outgoing leader's diplomacy as "truly amazing." But he also said that he will stick to "my own style," without elaboration.

Having taken a central role in the Abe administration over the last nearly eight years, Suga is not expected to depart much from key tenets of its policy agenda. But his unique background different from other political heavyweights, mostly with illustrious political pedigrees like Abe, raises cautious hopes that he could have more room for policy recalibration. 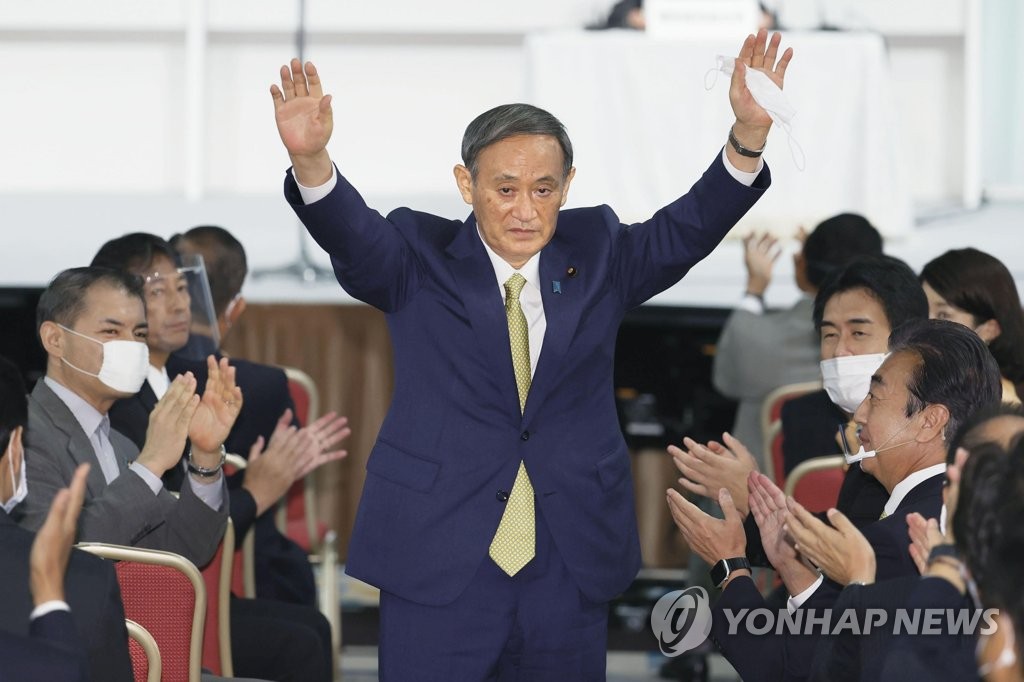 Suga, a son of a strawberry farmer and a self-made politician, is seen as largely free from pressure related to ancestral political traditions, or less fettered by factional demands from within the ruling party, analysts noted.

"There are two crucial differences. The first is that Suga is not bound by ancestral fealty to change Japan's constitution; he may support a strong and prosperous Japan's general goals, but he has more latitude about how to achieve those objectives," Patrick Cronin, the Asia-Pacific security chair at the Hudson Institute, told Yonhap News Agency via email.

"The second difference is that Suga can make a conscious choice to demonstrate his own brand by where he shifts course, however modestly, from Abe," he added.

Since the launch of the Abe administration, relations between Seoul and Tokyo have faltered due to territorial and historical issues stemming largely from Japan's 1910-45 colonization of the Korean Peninsula.

At present, the biggest irritants between the neighbors are the export curbs Japan slapped last year in apparent retaliation for the South Korean Supreme Court rulings in 2018 that ordered Japanese firms to compensate victims of colonial-era forced labor.

Tokyo argues that all reparation issues from Japan's colonial rule were settled under a 1965 treaty that normalized bilateral relations. But Seoul, focusing on its "victim-centric" approach, respects the court rulings on the forced labor issue.

The issue of Japan's wartime sexual slavery has also plagued the Seoul-Toyko ties, as the Abe government was seen as failing to atone fully for the humanitarian issue despite repeated calls from the victims, euphemistically called comfort women here.

A 2015 deal between the two governments appeared to offer an off-ramp from the comfort women issue. But it started to unravel as Seoul's Moon Jae-in administration embraced the claim that the deal was reached without full consent from the victims.

Abe's hard-line foreign policy stance came in line with his intent to shore up Japan's national pride, undermined by the rise of China, decades of economic stagnation and public angst stemming from repeated disasters, such as the Fukushima nuclear meltdown in 2011.

Abe's push for heavier armament and a stronger security role has further exacerbated historical enmity, as it evoked bitter memories of Japan's past militarism particularly amid continued colonial-era disputes.

With the relations between Seoul and Tokyo on a downward trajectory, the change of the hard-nosed leader, who critics said has centralized authority around his office and thus weakened voices of dissent, could create a much-needed opening for Korea to improve bilateral ties.

"The Moon administration should seek a fresh beginning with Suga because one good deed could start a virtuous cycle and produce a far more cooperative and forward-looking relationship between Seoul and Tokyo," Cronin said.

Moon has so far taken a two-pronged approach separating history issues from practical cooperation in economic and other realms. But calls have persisted for more active fence-mending efforts.

Moon and Suga could meet face-to-face later this year, as Seoul seeks to host the annual trilateral summit, which would also involve Chinese Premier Li Keqiang. Due to the new coronavirus, their talks could take place via videoconferencing.

Some foresee a U.S. role in promoting reconciliation between America's two core Asian allies whose cooperation is vital to its campaign to retain regional preeminence against an increasingly assertive China.