LG introduced the Wing, a dual-screen smartphone with a rotating form factor, at its online launching event.

The Wing will go on sale next month starting in South Korea and will be available in North America and Europe. LG did not confirm the price of the Wing, but industry insiders expected it to be sold at more than 1 million won (US$845) here.

The latest handset is the first product developed under LG's new smartphone initiative Explorer Project, which aims to deliver an "unexplored usability experience" with devices and services from its platform partners.

"LG Wing ushers in a new era of mobile discovery and is an exciting beginning to our Explorer Project initiative," said Morris Lee, who heads LG's mobile communications business. "Different than anything else on the market today, this innovative device challenges the industry status quo and provides consumers with a new mobile experience that will open up new ways to think about the smartphone." 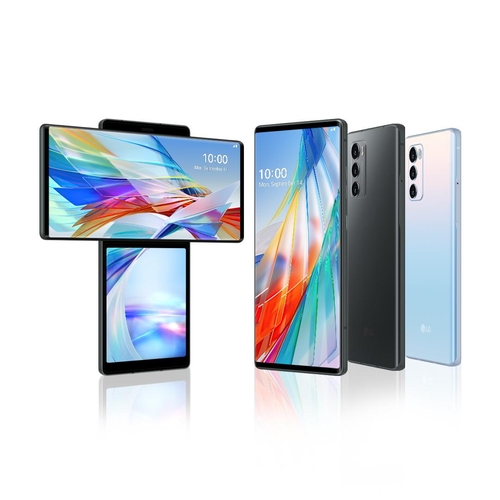 The Wing is highlighted by its two separate displays, with the main screen swiveling 90 degrees horizontally to reveal a secondary screen under it and creating a T-shape design.

LG said the device has gone through at least 200,000 swivel motion tests to verify the durability of its rotating screen.

When the 5G-supporting device is in the "swivel mode," users can utilize both screens for one app, or open two apps on each display. For example, Wing owners can easily watch a video on the main screen and chat with others on the secondary display, the company added.

There is no punch-hole camera on the main screen. Instead, the Wing has a 32-megapixel (MP) pop-up selfie camera appearing from the top of the body.

The Wing sports a triple-rear camera system including a 64MP primary sensor, a 13MP ultra-wide lens and a 12MP ultra-wide camera for the swivel mode.

LG said it has applied "gimbal motion camera" technology with six motion sensors for the first time in the industry, which gives a great level of stabilization especially when users shoot videos with the device.

The Wing will be powered by the Qualcomm Snapdragon 765 5G chipset that is 10 percent faster than the standard Snapdragon 765 processor in graphics processing unit performance.

The Wing has an 8GB RAM and a 128GB internal storage, which can be expanded to 2TB with a microSD card. It packs a 4,000 mAh battery.

Despite using two screens, LG said the Wing weighs only 260 grams, as it applied high-strength aluminum alloy to make the device. It comes in two colors: illusion sky and aurora gray. 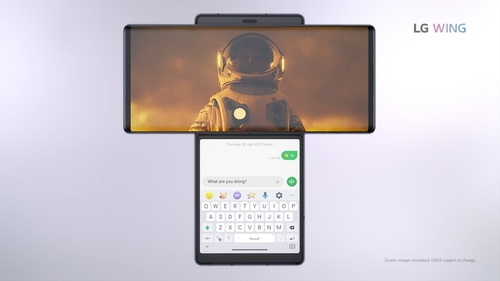 LG hopes the Wing can pave the way for its future smartphones developed under the Explorer Project, for which it has joined hands with global streaming service providers, including Ficto, Tubi and Rave, local web portal giant Naver and the top mobile chipset producer Qualcomm.

"The Explorer Project allows us to have the courage to tackle new challenges, to take risks and pursue new opportunities," said Andrew Coughlin, who heads mobile business at LG Electronics UK. "It's where you'll see new and different, but practical innovations."

LG has been trying to turn around its struggling mobile business. The company's mobile business unit posted an operating loss of 206.5 billion won in the second quarter of the year, extending its losses to the 21st consecutive quarter. Its revenue also declined 18.9 percent on-year to 1.31 trillion won in the April-June period.