SEOUL, Sept. 14 (Yonhap) -- An alliance of religious and civic groups on Monday called for a grassroots movement to help repair inter-Korean relations, ahead of the second anniversary of a historic agreement reached at the end of the third summit between leaders of the two Koreas in 2018.

The Peace Campaign to End the Korean War, an alliance of seven religious orders and 353 religious and civic groups nationwide, made the plea to the public to support the inter-Korean peace movement during a news conference in Seoul. 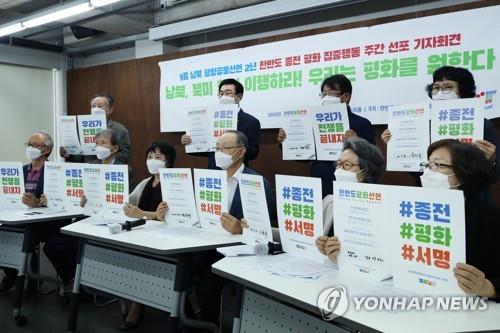 The conference came ahead of the Sept. 19 anniversary of the Joint Pyongyang Declaration signed by President Moon Jae-in and North Korean leader Kim Jong-un in recognition of their joint determination to end military hostility across their border and to boost cooperation.

"At present, dialogue and cooperation between the two Koreas are suspended. If the situation is left unattended, it won't be possible to prevent it from returning to the situation before the agreement," the alliance said.

"Inter-Korean exchanges and cooperation have been tied to the sanctions-oriented prescriptions of the United States delivered through a South Korea-U.S. working group. The government has not taken steps to resolve the distrust between the two Koreas," it said, stressing the government's effort to refrain from military drills and armament enhancement policies that can aggravate military distrust.

The alliance said it will engage in various activities, including an online peace campaign, participation in a peace forum organized by Gyeonggi Province, one-person demonstrations and distribution of peace-themed posters, until Sept. 26.

Civic groups call for inter-Korean peace ahead of 2nd anniv. of Pyongyang summit

Civic groups call for inter-Korean peace ahead of 2nd anniv. of Pyongyang summit