The new sanctions, which ban the supply of semiconductors made with U.S. equipment, software and design to Huawei without prior approval from Washington, became effective the same day.

Huawei is known as one of Samsung's top five customers. SK hynix reportedly depends on Huawei for some 10 percent of its sales.

Industry sources said the sanctions on Huawei will likely hit South Korea's semiconductor exports to China, given their huge dependence on the world's second-largest economy. 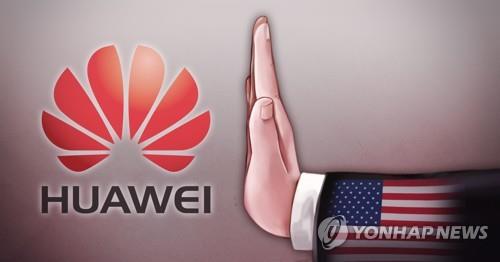 According to data from the Korea International Trade Association (KITA), China accounted for about 41 percent of South Korea's chip exports in the first seven months of this year.

During the same period, South Korean exports of flat panel displays and sensors reached $3.82 billion, or 43.7 percent of total shipments of those products. Vietnam ranked first with 44.5 percent.

The estimated loss amounts to about one-tenth of South Korea's overall chip exports in 2019, which came to $93.93 billion.

The U.S. sanctions come as Washington has increasingly sought to ban the use of Chinese technology, citing national security concerns.
(END)