India, Asia's third-largest economy, has been beefing up efforts to shield its domestic industries from foreign competitors by sharply raising import regulation probes in recent years.

"India's import regulations have recently been very tough and aggressive," the report from the Korea International Trade Association (KITA) said. "South Korean exporters should pay closer attention to them." 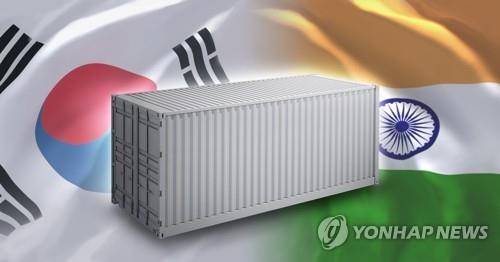 In February, New Delhi amended its enforcement decrees on anti-dumping and countervailing duties, and subsidies in a show of its growing protectionist tendencies.

"In particular, South Korean steel and petrochemical manufacturers should preemptively brace for the potential risk of import controls as they are prone to India's anti-dumping and countervailing tariffs," the report said.

According to the report, India's new investigations for import restrictions came to an average 60.5 cases per year between 2016 and 2019, nearly double the 30.3 cases recorded from 2010-15.

South Korean companies have been ramping up efforts to make forays into the world's second-most populous country, which has been emerging as one of the most promising markets in the world.

In the first half of this year, South Korea's exports to India sank 33.2 percent on-year to US$5.36 billion amid the coronavirus pandemic, with imports from India falling only 5.3 percent to $2.59 billion. Seoul is seeking to hike bilateral trade with India to $50 billion a year by 2030. Last year, bilateral trade reached $20.7 billion.
(END)