SEOUL, Sept. 15 (Yonhap) -- Considering the kind of massive offensive numbers he has put up this year, it's safe to assume the KT Wiz wouldn't be where they are today -- in the thick of South Korean baseball playoff race -- without their slugger Mel Rojas Jr.

But Rojas Jr. insists he wouldn't be doing what he's doing without his teammates. And with the Wiz sitting in a virtual tie for fourth place with the Doosan Bears and closing in on the first postseason in franchise history, the slugging outfielder has full confidence in his teammates that they can all get the job done. 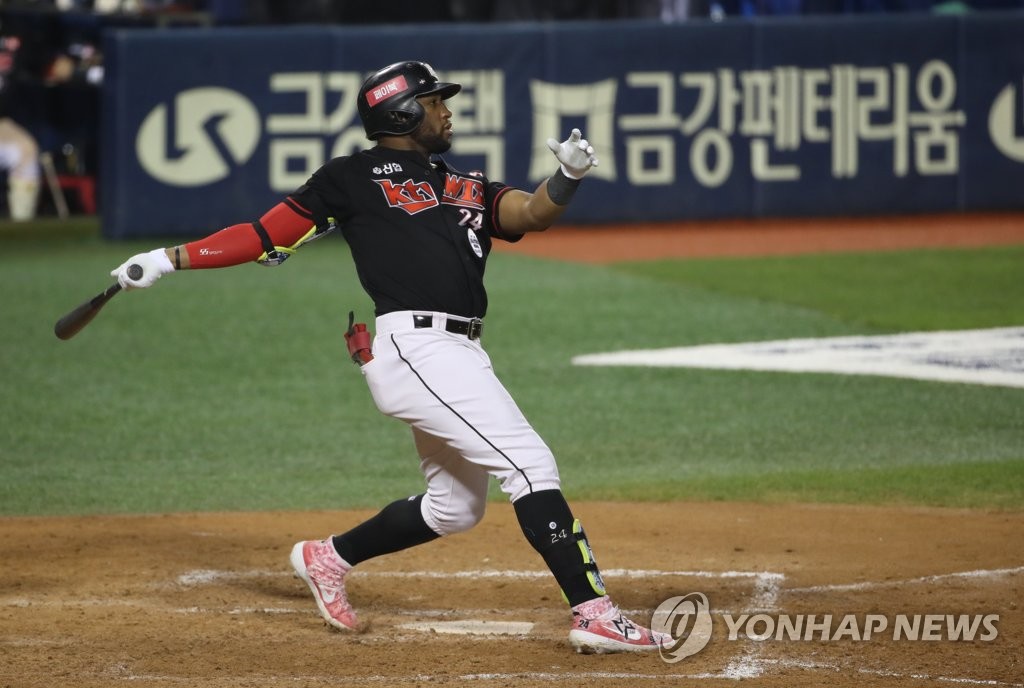 "I trust my teammates. They're doing really well," Rojas Jr. told Yonhap News Agency in an interview on Monday, a day after delivering a walk-off single in the bottom ninth for a 5-4 win over the Hanwha Eagles. "This year, I feel like we've got each other's back."

Rojas Jr. then reeled off names of fellow boppers such as Kang Baek-ho, Hwang Jae-gyun and Yoo Han-joon, saying when one struggles, one of the others always comes through in clutch with big hits.

And with those teammates picking him up day in and day out, Rojas Jr. has also tried to take on a leadership role, offering advice to younger players and also going out of his way to help struggling veterans at times.

"I try to help them as much as I can," he said. "I am not just here to perform. I feel like I am also here to help my teammates get better every day."

And perform, he has. Few players in the entire Korea Baseball Organization (KBO), let alone on the Wiz, have been as productive as the switch-hitting machine this year. These are numbers worthy of MVP consideration. And Rojas Jr. was voted a starting outfielder for his Dream All-Star team, made up of players from the Wiz, Bears, SK Wyverns, Samsung Lions and Lotte Giants.

There will be no All-Star Game this season, though. The start of the regular season was pushed back by more than a month to May 5 due to the coronavirus outbreak, and in an attempt to squeeze the usual 144 games into a tighter window, the KBO decided to scrap the All-Star Game, set for July 25.

In lieu of the game, voted-in All-Stars will wear special patches on their jerseys the rest of the season.

Rojas Jr. said it's also a shame that there will be no Home Run Derby because he thought he was "really going to win it this year" after coming up short last year. 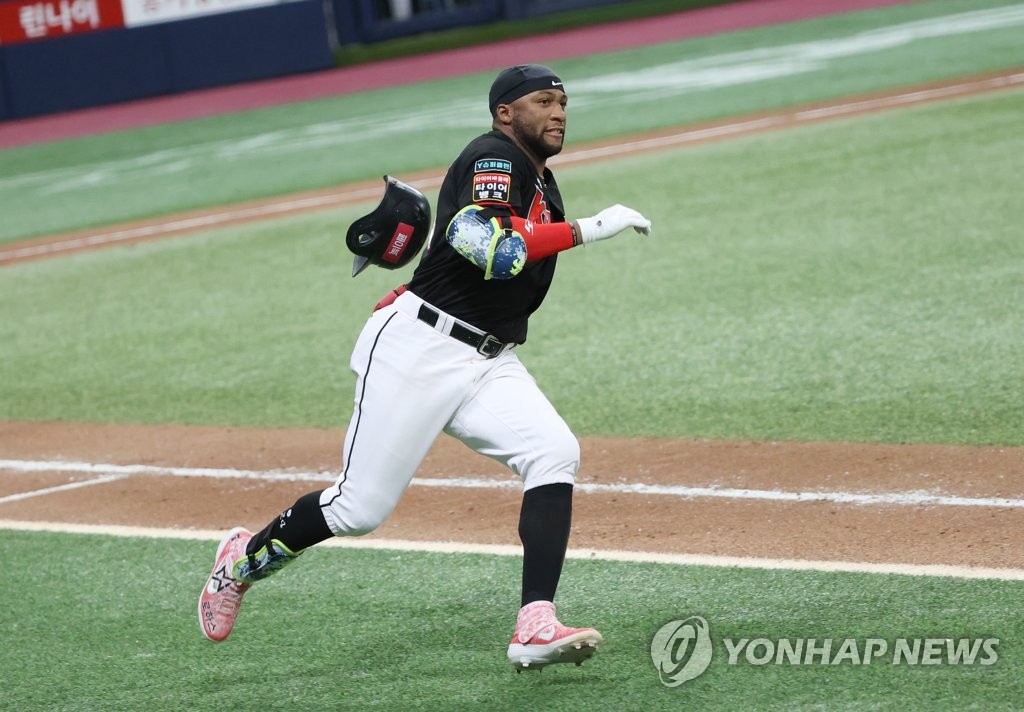 The KBO decided instead to keep track of home runs hit by All-Stars between Sept. 8 and Sept. 27. They will earn points for their home runs -- for instance, a grand slam is worth four points and a three-run home run is worth three points, and so forth -- and the hitter with the most points will receive a gold bar worth 700,000 won (US$590).

When informed of the All-Star home run race and the prize, Rojas Jr. said, "I don't care about that. Obviously, it'll be cool to win it. But my focus is the postseason. That's it."

The Wiz joined the KBO in 2015 as the 10th franchise and have never been to the postseason. They finished last in Rojas' first season in 2017, and then ninth in 2018. Last year, they finished with a .500 record for the first time, with 71 wins, 71 losses and two ties putting them in sixth place, just two games out of the final playoff spot.

They're entering Tuesday's action at 58-46-1 with 39 games remaining. The franchise record of 71 wins will likely fall. They have the most wins so far in September with nine, against three losses.

"It's definitely fun being in the race for the playoffs this year," Rojas Jr. said of the winning atmosphere in the clubhouse. "I've been part of 2017 and 2018, where we weren't as good. We had great talent. We weren't very mature. We were struggling back then." 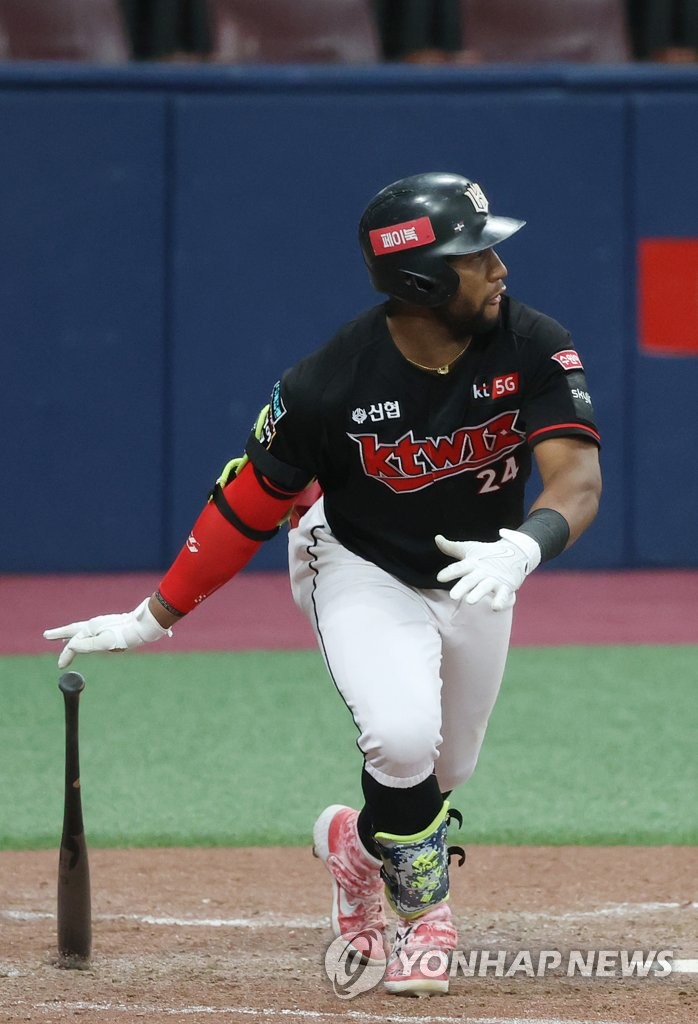 Speaking of which, Rojas Jr. went through a cold spell in mid-August, just when it had seemed the slugger would be immune to any slump. It coincided with the end of three-game series and the start of two-game sets, which put heavier travel burden on clubs.

Those two-game sets started on Aug. 18. The Wiz opened the week in Daegu in the southeastern part of the country, and they traveled up north for two more games in Daejeon, before coming home to Suwon, just a bit farther north, for the weekend. Then it was off to Seoul, another 45 or so kilometers north from Suwon, and then down to Gwangju, 330 kilometers south of the capital.

"To be honest, I think it was traveling," Rojas Jr. said on his reason for the August decline. "My body felt great. I thought mentally, I felt great. But we all go through bad moments. Pitchers were making really good pitches against me. I tried to stay positive and keep my head up."

Rojas Jr. already has five multi-hit games this month to match the total from August, and he has more RBIs (14) than strikeouts (8). 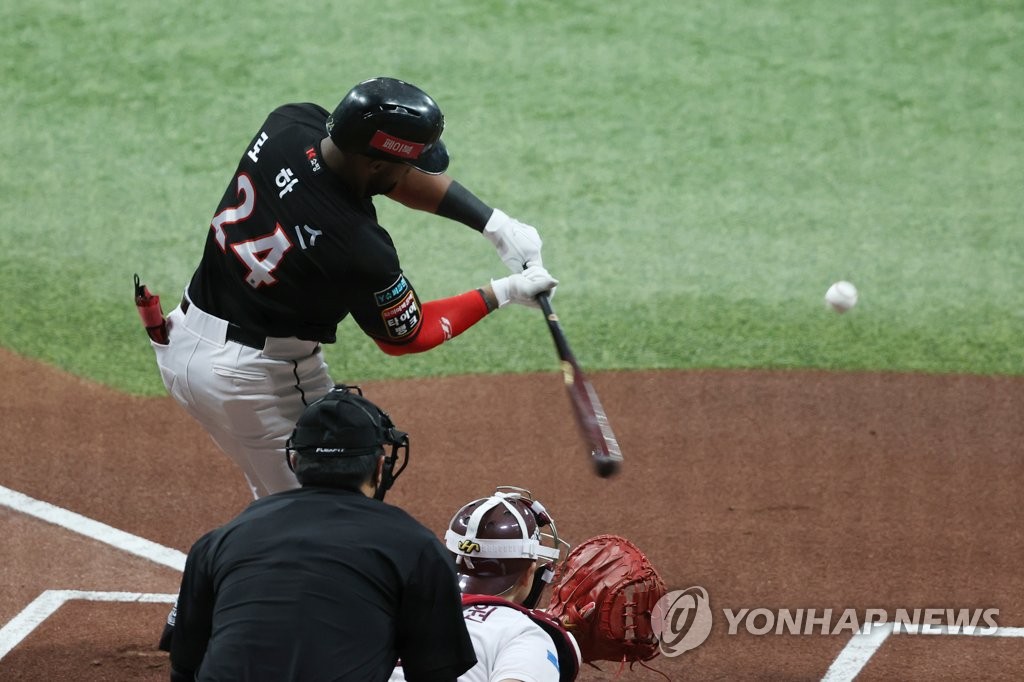 He said he has always prioritized his recovery routine and has doubled down on it this month. It includes making sure he eats breakfast -- "It's one of the most important things," he said -- and trying to take naps and getting his therapy and massages. Relaxing during his downtime and fending off stress is another key.

Rojas Jr. will need all the energy he can get for a key two-game series against the Bears on Thursday and Friday. They've split their 10 meetings so far, and with those two clubs so close together, any slight advantage in the season series will be huge at the end of the regular season.

Rojas Jr. said he wants to stay even keel because, "It's just like playing any other team."

"The reason I say that is I think we play really well against teams like Doosan," he said. "I feel like we give them a good battle."

With two-game sets in play until next week and the term "winning the series" not applicable, Rojas Jr. said he is trying to help the team "win the week," meaning, taking at least four out of six games per week.

"The least we can do is split six games," he said. "We're in a pretty good spot right now." 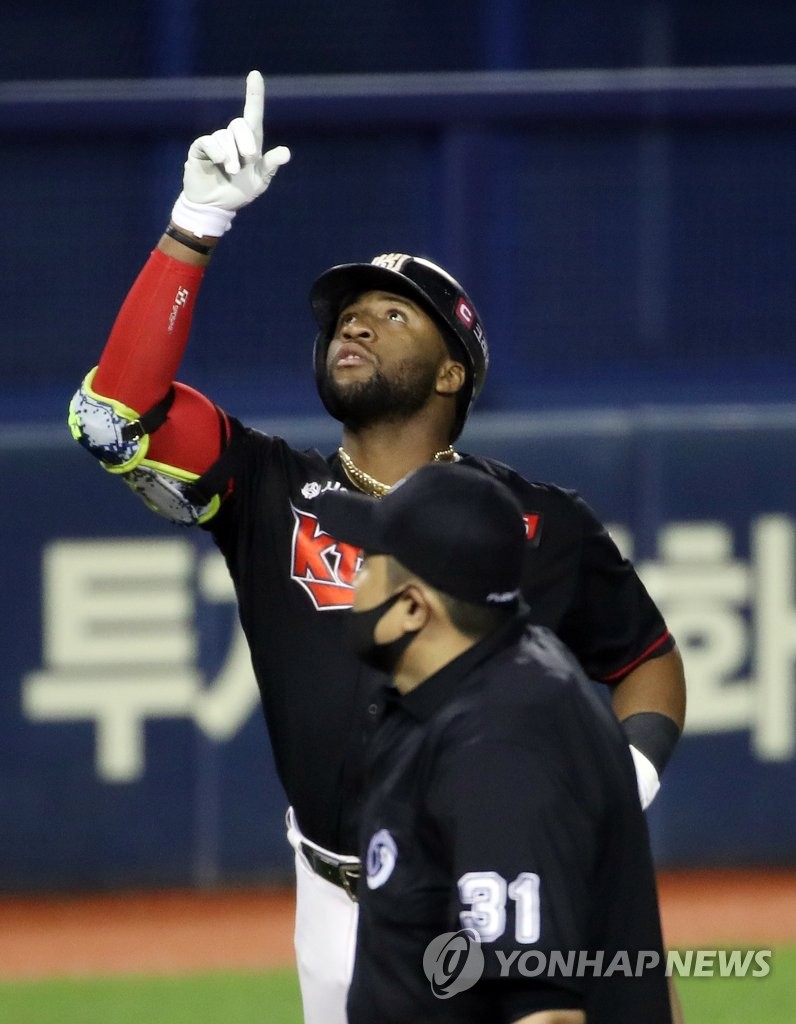