SEOUL, Sept. 15 (Yonhap) -- A revised law intended to expand the scope of diseases caused by the use of humidifier sterilizers and increase compensation for their victims and their bereaved families is to take effect later this month, the Ministry of Environment said Tuesday.

The ministry said a revision of the Enforcement Decree of the Special Act on Remedy for Damage Caused by Humidifier Disinfectants was approved by the Cabinet meeting in the day and will go into effect on Sept. 25.

Under the revised law, people who become sick with asthma, pneumonia, bronchiectasis and interstitial lung disease after being exposed to humidifier disinfectants will be put in a more advantageous position in their damage suits against manufacturers. 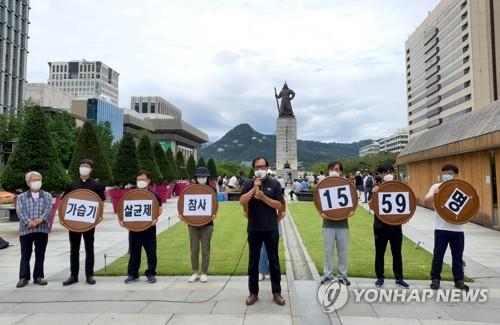 Those patients have so far had difficulties verifying damage to their health because such diseases can be caused by various factors, such as smoking, aging, eating habits, occupational factors and family history, in addition to exposure to toxic humidifier sanitizers.

The ministry said it will provide legal advice when the victims prepare to launch litigation against humidifier disinfectant producers.

The amended law also calls for raising the amount of special condolence money for the bereaved family of a victim who died due to poor health from the use of humidifier disinfectants to about 100 million won (US$85,000) from the current 40 million won.

Those who had previously received the special condolence money will be paid the difference, the ministry explained.

Medical care allowances for victims will also rise by about 1.2 times, it said, adding the maximum monthly allowance will be increased to over 1.7 million won.

South Korea's notorious humidifier sterilizer scandal came to light in 2011 after four pregnant women died of unknown lung problems. More than 6,700 people have registered themselves as victims, and family members claim that more than 1,550 deaths are linked to humidifier disinfectants.