SEOUL, Sept. 15 (Yonhap) -- South Korean shares extended their winning streak to a fourth session on Tuesday to close at a more than two-year high, helped by advances in tech heavyweights and progress in coronavirus vaccine development. The Korean won rose against the U.S. dollar.

Trading volume was moderate at about 840 billion shares worth some 11.7 trillion won (US$9.9 billion), with losers outnumbering gainers 423 to 411. 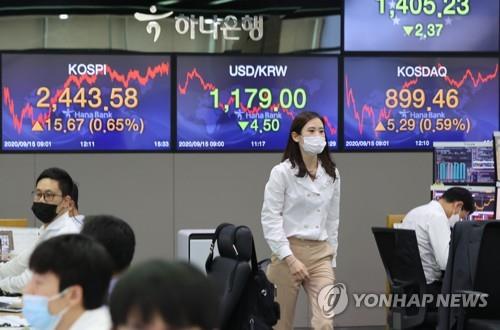 The chief executive of pharmaceutical giant Pfizer predicted that the United States would be able to deploy a COVID-19 vaccine before the end of the year.

The local currency closed at 1,179 won against the U.S. dollar, up 4.5 won from the previous session's close.

Bond prices, which move inversely to yields, closed higher. The yield on three-year Treasurys lost 1.2 basis points to 0.907 percent, and the return on the benchmark five-year government bond fell 1.9 basis points to 1.198 percent.

(LEAD) Seoul stocks up for 4th day to over 2-year high on tech gains, vaccine hopes

(LEAD) Seoul stocks up for 4th day to over 2-year high on tech gains, vaccine hopes