Trading volume was moderate at about 755 million shares worth some 11.6 trillion won (US$9.9 billion), with losers outnumbering gainers 543 to 308. 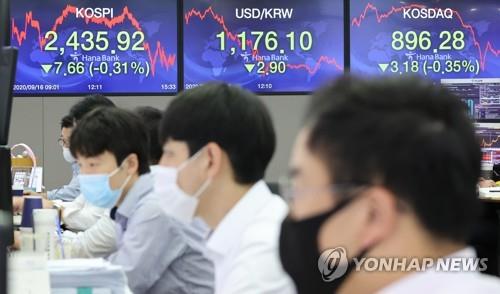 Investors attempted to cash in recent gains after the index shot up to the highest since June 2018 the previous day.

In its last meeting, the FOMC revealed a shift of mid- and long-term policy in its inflation target.

Market consensus is that the FOMC is likely to unveil more detailed easing plans, such as stronger forward guidance and asset-buying plans, to buoy the pandemic-hit market.

The local currency closed at 1,176.1 won against the U.S. dollar, up 2.9 won from the previous session's close.

Bond prices, which move inversely to yields, closed mixed. The yield on three-year Treasurys added 0.3 basis point to 0.91 percent, and the return on the benchmark five-year government bond slipped 1 basis point to 1.188 percent.