"There's a need to seriously review whether to hold the 2022 presidential and regional elections simultaneously," National Assembly Speaker Park Byeong-seug said in an online press conference marking his 100th day in office.

"The two elections will take place three months apart in the first half of 2022. It is predicted to consume quite a lot of national resources," he said. "I hope a conclusion could be reached on this issue next year."

Following up on his offer in July to hold parliamentary talks with his North Korean counterpart, Park also said he "will prepare consistently" to make the talks happen.

"I request that the ruling and opposition parties reach an agreement to adopt a resolution calling for inter-Korean parliamentary talks," he added.

The speaker also pledged that he will strive to lay the groundwork for the envisioned partial relocation of the National Assembly to the central administrative city of Sejong within the four-year term of the current assembly.

The ruling Democratic Party is pushing to establish a Sejong branch of the legislature in its broader policy vision to decentralize Seoul's predominance as the economic and administrative capital.

"Within (the term of) the 21st National Assembly, the foundation for the Sejong assembly should be laid," he said.

Park also vowed efforts to equip the National Assembly with a videoconference system before the end of this year so that each parliamentary standing committee could hold its sessions online and contact-free amid the ongoing pandemic. 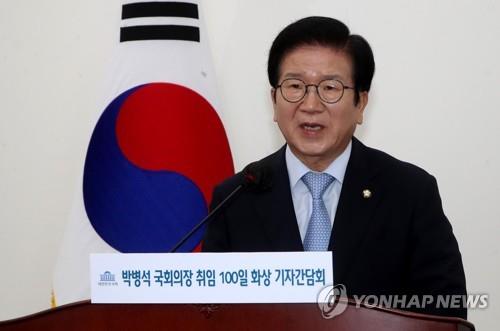