Individual investors' net buying of shares traded on the country's main KOSPI and secondary KOSDAQ markets came to 55.9 trillion won as of Wednesday this year, according to the data from the Korea Exchange.

Investor deposits at brokerage houses for stock investment stood at 56.7 trillion won as of Tuesday, up some 29.3 trillion won from the end of last year.

South Korean retail investors also snapped up overseas stocks worth nearly 16 trillion won as of Monday, according to separate data from the Korea Securities Depository. 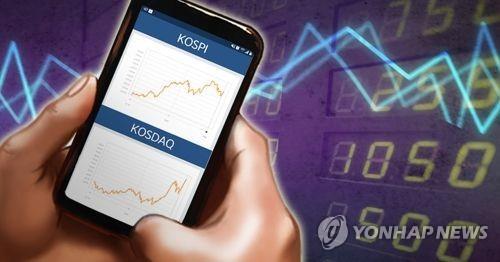 Over the past month alone, domestic investors loaded up on shares in Electric vehicle leader Tesla Motors Inc. amid an overseas stock buying craze here.

South Korean investors have been increasing their holdings of overseas stocks in recent years with the amount rising to $2.51 billion in 2019 from $1.57 billion in 2018 and $1.45 billion the prior year.

Analysts said local individual investors are thus estimated to have spent nearly 100 trillion won on domestic and overseas stocks though domestic institutions have contributed to a rise in investment deposits and overseas stock buying.

They added that retail investors are believed to have posted relatively good returns from their massive stock purchases as U.S., Chinese and other major stocks markets have returned to pre-virus levels.

Yet, there are growing concerns over the overvaluation of domestic and overseas stock markets stemming from an expansion in market liquidity.
(END)