Gen. John Hyten told a virtual forum that the specific numbers were "classified" and in many ways hard to understand.

"But a small number is a confident characterization of nuclear capabilities that can threaten their neighbors or the United States," he said in a symposium hosted by the National Defense University's Center for the Study of Weapons of Mass Destruction.

Hyten offered no further explanation of what he meant by "a small number." 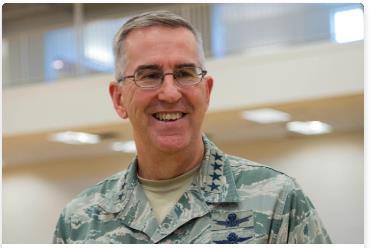 The U.S. has never officially discussed its assessment of North Korea's nuclear capabilities, but the communist state is widely estimated to possess more than 70 nuclear warheads.

North Korea has conducted a total of six nuclear tests, between October 2006 and September 2017.

In his latest book, "Rage," Washington Post journalist Bob Woodward discusses U.S. response to a North Korean attack that he says could include the use of up to 80 nuclear weapons.

While the statement is largely believed to describe the U.S.' possible use of nuclear weapons in response to an attack, some in South Korea insisted it described a North Korean attack that could include 80 nuclear weapons.

Hyten also stressed that U.S. homeland defense starts not with its missile defense system but with its strategic deterrent.

The United States' deterrence includes the airmen that remain alert on their B-2 bombers and sailors on their Ohio-class submarines, Hyten said.

The U.S. also continues to enhance its deterrent, he added, noting the B-2 bombers will soon be replaced by the B-21 and B-52 bombers and the Ohio-class submarines by the Columbia-class submarines armed with "nuclear weapons on board."