SEOUL, Sept. 18 (Yonhap) -- A Seoul court on Friday acquitted a former chief judge accused of leaking confidential information about a criminal investigation to cover up alleged corruption of bailiffs. 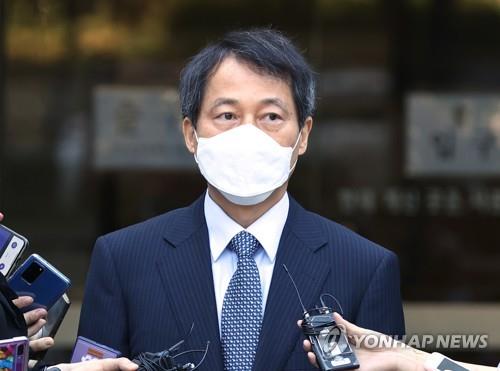 Lee was indicted in March 2019 for allegedly acquiring information about a criminal investigation of bailiffs at Seoul Western District Court suspected of bribery, including details of court warrants. He was charged for allegedly reporting the information to a senior official at the Court Administration Office in order to hinder the prosecution's probe into the case from October to November 2016.

He was also accused of unfairly ordering court staff, including the secretary-general, to procure a copy of the warrant and deliver it to him.

The prosecution had argued that his acts carried the Court Administration Office's intention to protect "court staff," but the court dismissed the claim, saying that the facts for indictment were not proven.

Lee's orders are considered acts of inspection, the court concluded.

Also, the defendant had no purpose to interrupt the investigation, and even if he had given orders to get him a copy of the warrant, it is part of the chief justice's work and thus cannot be considered an abuse of power, the court explained.

Lee is one of the 10 current and former judges tied to a judiciary power abuse scandal involving Yang Sung-tae, the former Supreme Court Chief Justice under former President Park Geun-hye's administration. Yang is currently under trial.

Yang is accused of having used trials as bargaining chips in dealings with the office of Park to support his bid to establish a court of appeals. He is suspected of having pressed subordinates at the National Court Administration, the top court's governing body, to devise plans to influence politically sensitive trials for Park, who is now jailed over corruption charges.