SEOUL, Sept. 19 (Yonhap) -- The members of global K-pop superstar BTS on Saturday delivered a powerful motivational speech for South Korean youth, sharing candid tales of their inner struggles on the path to becoming one of the world's most popular music acts in history.

The speech, delivered in turns by all of the group's seven members, was made at the country's inaugural Youth Day ceremony at the presidential office Cheong Wa Dae. BTS made history last month by becoming the first South Korean recording artists to reach No. 1 on Billboard's main Hot 100 singles chart last month with "Dynamite."

"Around 2018, I remember all the members felt lost after experiencing undeservedly overwhelming success. Even if our path is always lined with flowers and fruits, we can't be sure if that's how it'll always be," BTS leader RM said, explaining the band's career ups and downs throughout the years.

Despite being on the top, RM said he was well aware how things could always go "downhill again when the next rainstorm will strike."

The singer-rapper stressed how BTS members turned to one another during times of uncertainties -- even when things seemed to be working out fine on the outside.

"At the end of this uncertainty and depression, the seven of us began to fill each other with dreams and trust, like we were boys again."

"And then came August 2020. We reached No. 1 on the Billboard chart. Then another first. These were the accolades we received when we picked ourselves back up. We all cried tears of thanks." 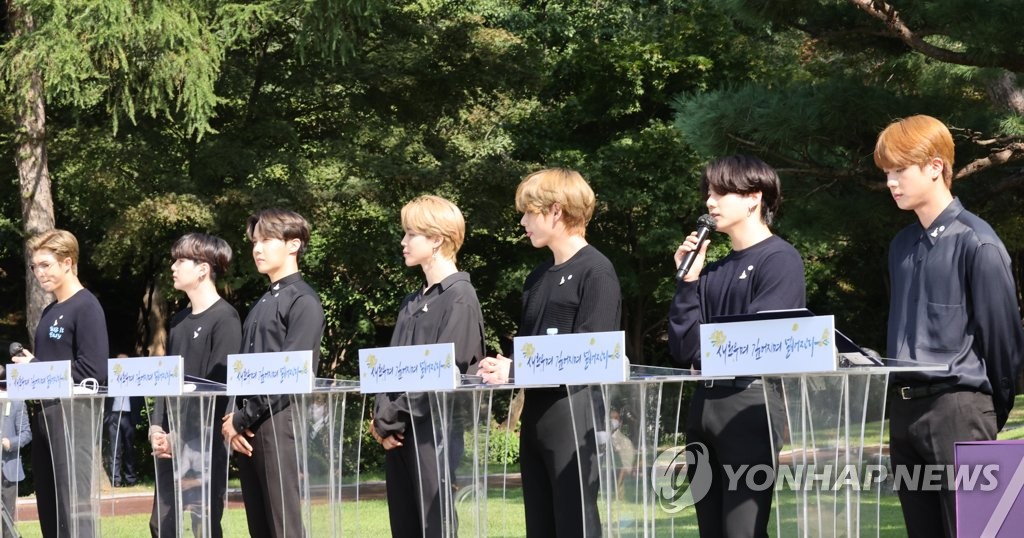 RM offered thanks to bandmates and also gave a shotout to fans, who, according to the singer, held the group "up in the face of despair and surrender."

Members also shared some emotions they experienced during the start of their careers, highlighting how, despite the group enjoying global stardom, the band came from a rather scrappy and humble beginning.

"We set out with nothing but music as our dream, but we didn't know where we were going, whether we were going uphill or downhill, or as we took a break after becoming tired, whether around the corner there was a paradise or a pitfall. That's how we started," J-Hope said.

J-Hope also explained the emotional toll the group experienced after breaking out big.

"But just as we were showered with love and attention beyond our expectations, our shadows became longer and weightier." The singer said members began asking themselves, "Who are we? What love are we receiving?"

Suga also talked about how the underdog group back in the day went on "sometimes recklessly and hardheaded" amid its drive to succeed. 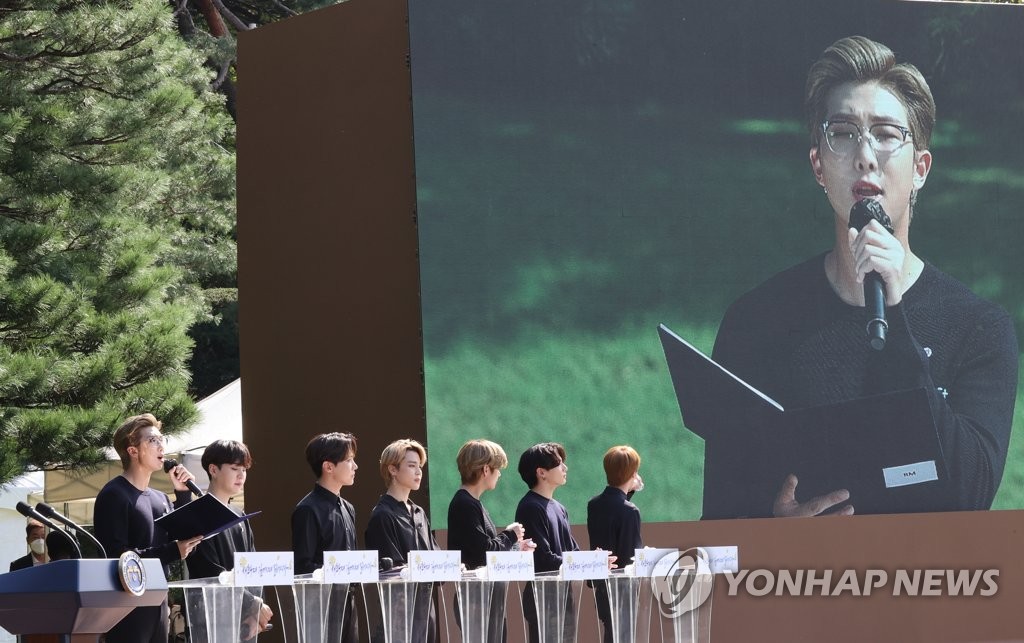 "We didn't know what to do (back in the early days), but we kept telling ourselves with some despair that this too shall pass, that these (difficult moments) will become fond memories."

Jimin also shared some of the frustration BTS experienced earlier, of how the band felt "stuck in place" for a long time despite working hard and running without stopping. The singer recalled how words of encouragement from close people became a "guiding light" to the band lost without direction.

V explained how BTS members as individuals tried to pull themselves out of the "emotional quagmire" that followed global success. "Be honest to myself. Feel each emotion and let them out," V recalled telling himself during times of self-doubt and insecurities.

"If you are facing hardships in your life in preparing for the future, I hope you will draw some strength from our story from the year 2020," RM said. 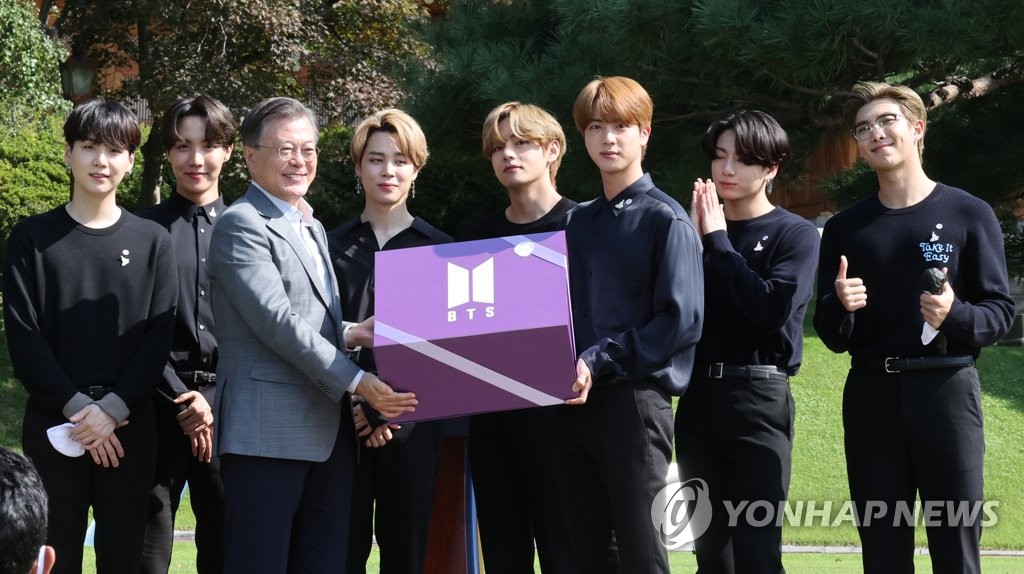 The latest speech by the global K-pop giant shared a similar theme to the speech the band gave at the 73rd session of the U.N. General Assembly in New York in September 2018. BTS also delivered a similar message in its commencement speech during the "Dear Class of 2020" virtual commencement event organized by YouTube in June.

The government designated the third Saturday in September of each year as Youth Day under the Framework Act on Young Adults enacted last month.

Meanwhile, BTS presented President Moon Jae-in with a purple-colored box as a "Year 2039 Gift" that will be stored at the National Museum of Korean Contemporary History in Seoul, like a time capsule. The box will be opened at the 20th Youth Day event in 2039. 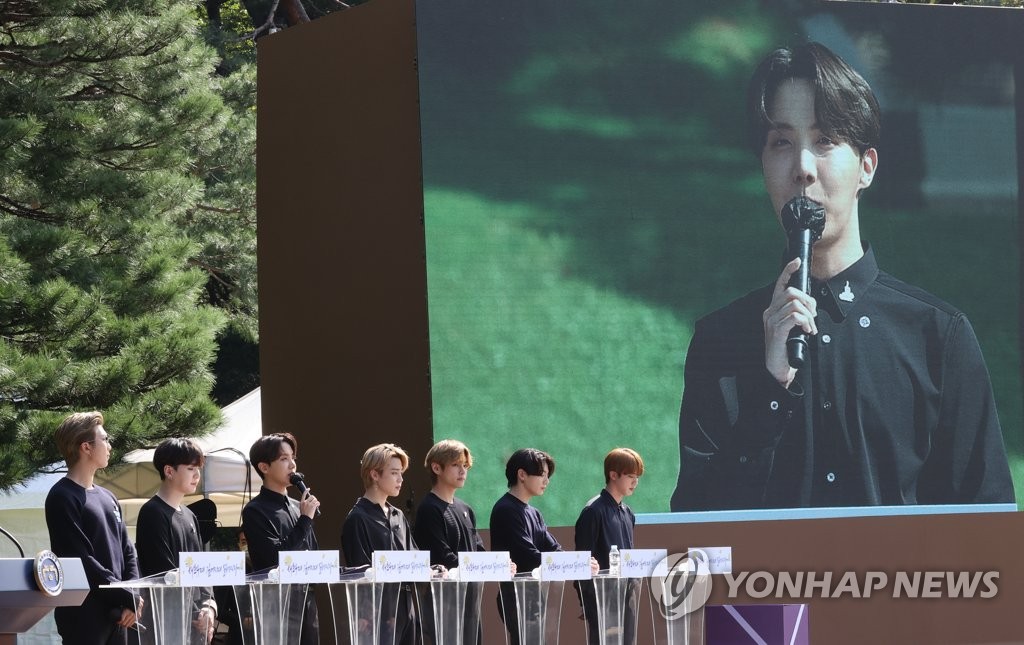