SEOUL, Sept. 20 (Yonhap) -- As the undisputed staff ace for the Toronto Blue Jays, Ryu Hyun-jin was asked to stop the bleeding for a team that had dropped five straight games.

The South Korean left-hander did his part against the Philadelphia Phillies in Philadelphia on Saturday (local time), holding them to just two runs over six innings. His teammates didn't hold up their end of the bargain, though, as they managed just two hits in a 3-1 loss. 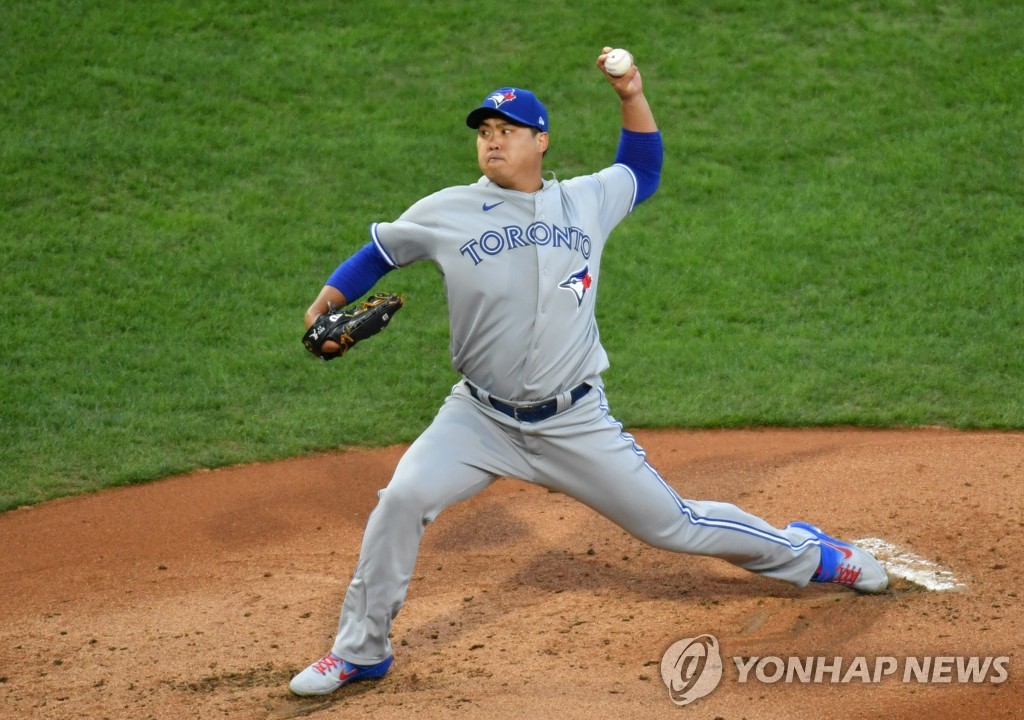 Ryu was in his vintage form through four innings, as he allowed just one hit and struck out six. The Blue Jays spotted him a 1-0 lead in the top fifth thanks to Travis Shaw's solo home run.

But the Blue Jays could have done more damage against ineffective starter Vince Velasquez, who walked a leadoff batter in each of the first three innings. The Blue Jays did him a favor, though, as they failed to cash in on any of these free passes.

Those missed opportunities came back to bite the Blue Jays in the fifth, as the Phillies suddenly discovered their stroke and touched Ryu for five hits.

Jay Bruce started the rally with a double. A sacrifice bunt later, the Phillies got four consecutive singles off Ryu for two runs. Two of those hits came off Ryu's bread-and-butter changeup.

Ryu retired the final two batters of the fifth with the bases loaded, keeping it a 2-1 game and giving his team a a chance to rally.

It never came, and after Ryu held the Phillies off the board in the sixth, the Blue Jays' bullpen gave up another run in the bottom eighth to lose 3-1. 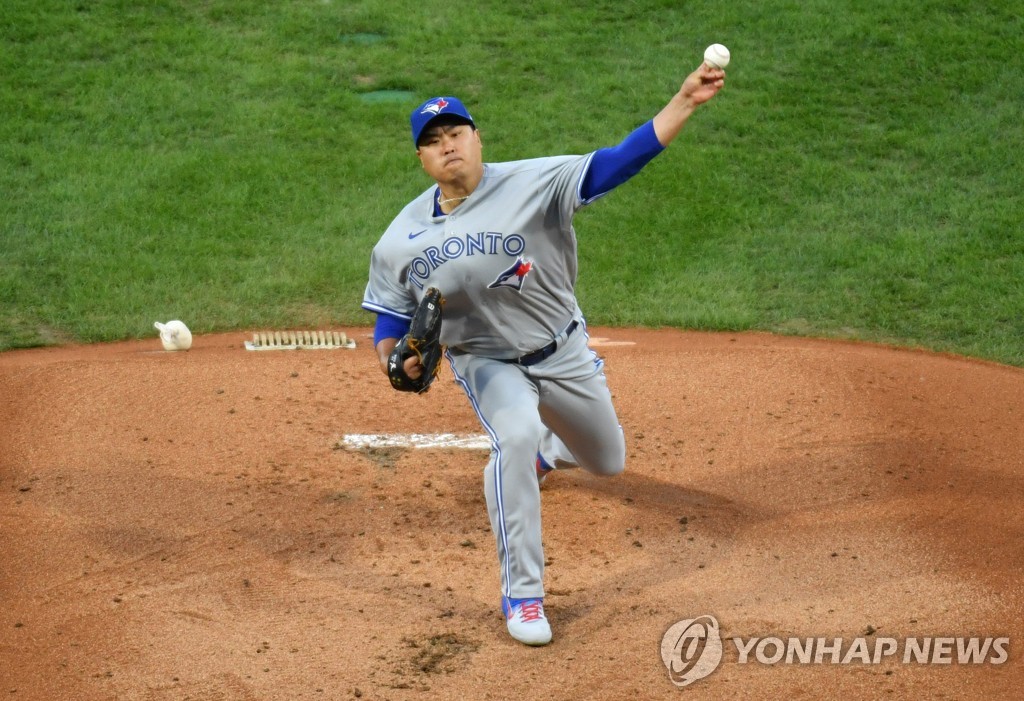 There wasn't much to nitpick from Ryu's pitching. His curveball looked particularly sharp, leading to four of Ryu's eight strikeouts. Ryu threw 14 curveballs out of his 99 pitches and induced five whiffs.

Of note, Andrew McCutchen and Bryce Harper, batting first and second in the lineup for the Phillies, both hit singles off Ryu in their third plate appearance against the left-hander, with McCutchen's hit breaking a 1-1 tie. They had both struck out in the third inning.

Advanced data shows that starting pitchers often struggle against a lineup when hitters come up for a third time in the same game. Before Saturday, opponents were hitting .333 with an on-base plus slugging percentage (OPS) of .919 against Ryu in their third plate appearances, compared to a .198 batting average and a .559 OPS the first time through the order and a .232 average and a .641 OPS the second time.

The Blue Jays have tried particularly hard to avoid exposing their starters to lineups more than three times in a game. No Toronto starter has thrown a pitch in the seventh inning or made over 100 pitches this season. Ryu has thrown 99 pitches in a start twice this season.

The loss notwithstanding, Ryu's was by far the best start by a Blue Jay during this losing streak, which began right after Ryu held the New York Mets to a run over six innings in a 7-3 win last Sunday. 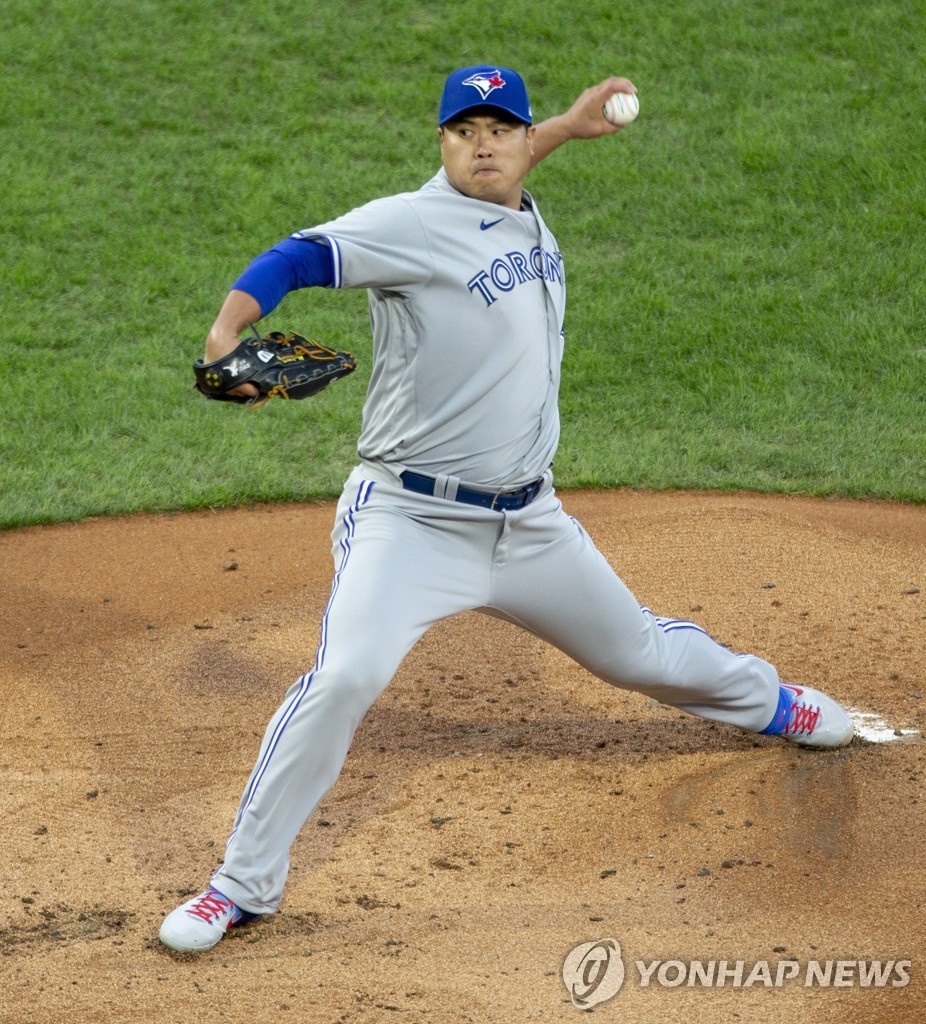 Ryu put the loss on his shoulders afterward, saying he should have made the early lead stand.

"I was facing the bottom part of the order (in the fifth), and I gave up a leadoff double there," Ryu said. "My teammates got me the first run of the game, but I gave it right back in the very next inning. When a team scores first, the next inning is really crucial for a starting pitcher, because if you allow a run right away, it will shift the momentum. I didn't get the job done today."

In five games leading up to Saturday, the Blue Jays had surrendered 58 runs and 31 walks, while serving up 20 home runs.

In his two previous starts, facing the New York Yankees and then the Mets, Ryu was forced to adjust his game plan on the fly when he struggled early with the command of certain pitches. He said he didn't have to do that against the Phillies.

"My curveball and cutter were pretty effective from early on," Ryu said."I was able to strike out a few batters and generate a lot of soft contact."