SEOUL, Sept. 21 (Yonhap) -- The market value of South Korean auto giant Hyundai Motor Group has recovered to the 100 trillion-won (US$85.9 billion) level after more than 28 months thanks to brisk sales of hydrogen and electric vehicles, data showed Monday.

The total market capitalization of Hyundai Motor Co. and 11 other listed subsidiaries came to 100.2 trillion won as of Thursday, according to the data from the Korea Exchange.

South Korea's leading automaker was valued at 39.3 trillion won, with No. 1 auto parts manufacturer Hyundai Mobis Co. having a market value of slightly over 23 trillion won. The market cap of the second-largest carmaker, Kia Motors Corp., stood at 19.7 trillion won.

The three flagships accounted for more than 80 percent of the group's aggregate market capitalization. 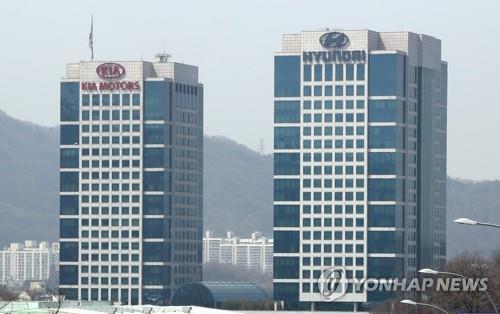 It is the first time since May 2018 that the group's market value has surpassed the 100 trillion-won mark.

The group's market cap, which flirted with 130 trillion won at the end of 2011, slumped to a yearly low of 45.3 trillion won on March 19 as earnings of the three major units failed to live up to market expectations.

Market watchers attributed the group's market-cap increase to its strategy to transform into a leading global maker of hydrogen-powered cars and electric vehicles.

According to a market report, Hyundai Motor Group retained the top spot in the global hydrogen car market and was the No. 5 seller of electric vehicles in July.