SEOUL, Sept. 21 (Yonhap) -- Kia Motors Corp. said Monday it will resume operations at one of two domestic plants that were suspended after some of its workers were infected with the coronavirus.

Kia halted the operations of two plants in Gwangmyeong, just south of Seoul, from Wednesday through Monday, with all of the 6,000 employees at the plants staying at home, a company spokesman said over the phone. 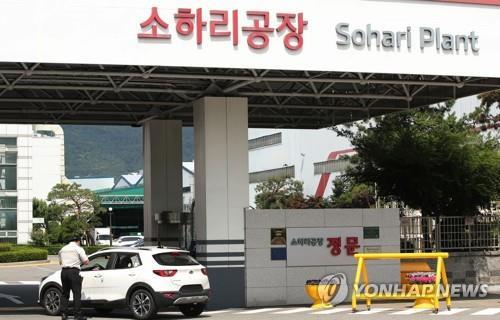 As of noon Monday, 11 assembly line workers were confirmed to have been infected with the virus. The number of related cases reached 18, as their family members and acquaintances were also infected with the disease, he said.

The company is expected to suffer production losses if the plant's suspension continues for several days. The two plants in Gwangmyeong have a combined capacity of 320,000 units a year.

Kia has eight plants in Korea -- two in Gwangmyeong, three in Hwaseong and three in Gwangju -- and seven overseas ones -- three in China and one each in the United States, Slovakia, Mexico and India. Their overall capacity is 3.84 million units.
(END)