SEOUL, Sept. 21 (Yonhap) -- Star actor Yoo Ah-in will return to the silver screen in the upcoming crime drama "Voice of Silence" as an aphasic character a few months after the hit zombie thriller "#Alive."

The new movie, the directorial debut of Hong Ui-jung, is about two men, Tae-in (Yoo) and Chang-bok (Yoo Jae-myung), who bury dead people on request by crime organizations in a rural area. One day, they are embroiled in a series of unexpected incidents after they have to take care of an 11-year-old kidnapped girl. "Tae-in doesn't speak. I don't think he is unable to speak at all as he makes some noises sometimes. He refuses to communicate with the world for some reasons," the 33-year-old actor said in a press conference streamed online Monday. "As an actor, it was easy to play a character that doesn't speak. But it was a challenge for me at the same time."

He said he did not try to depict all of Tae-in's emotions and intentions through facial expressions but strived to exist as Tae-in, who thinks he is not a criminal although he works for crime organizations. Tae-in is even hard-working and diligent in doing his not-that-decent job.

"I just wanted to create some energy as Tae-in himself in front of the camera, so I gained some weight and changed my appearance," said Yoo, who has filled his filmography mostly with adolescent characters that voice the thoughts of his generation.

"Voice of Silence" is Yoo's second film in 2020, following the zombie thriller "#Alive" that attracted some 1.9 million moviegoers this summer. It also topped the global movie chart of Netflix on its first days of its release. 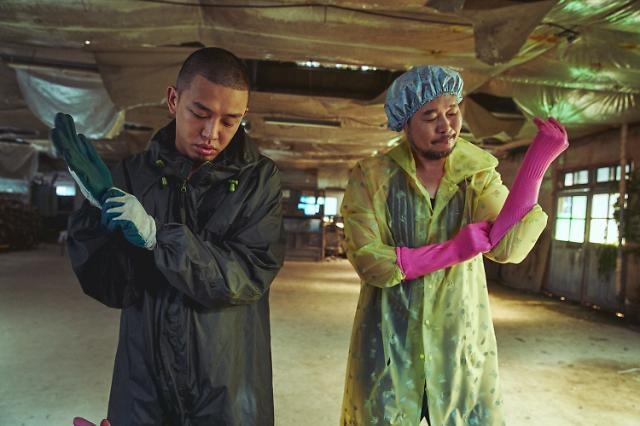 He said the scenario of "Voice of Silence" written by director Hong appealed to him as the story raises questions about our attitude and judgment toward good and evil in a sophisticated and incisive way.

"Director Hong took basic and ordinary narratives from a world where normal people live and created a powerful story that stimulates our emotions," he said. "It looks like a story about the past, but it's about our time."

Director Hong, whose first short film "Habitat" (2018) was invited to the 23rd Busan International Film Festival, said she wanted to express a paradoxical and odd balance among contradictory things in her first feature film "Voice of Silence."

"Voice of Silence" will be released in October.