SEOUL, Sept. 21 (Yonhap) -- South Korean shares fell below the 2,400 mark on Monday, as lingering valuation pressure drove down the key index. The Korean won rose against the U.S. dollar to the highest level in eight months.

Trading volume was high at about 1 billion shares worth some 14 trillion won (US$12.1 billion), with losers outnumbering gainers 694 to 168. 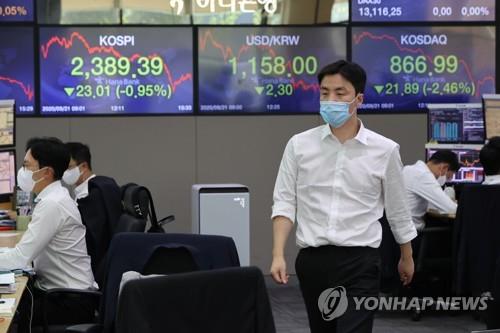 The KOSPI closed lower after a choppy session. Losses in bio and chemical heavyweights lead the index's fall.

Valuation concerns lingered heavily on the local stock markets after the key stock index exceeded the psychologically important 2,400 level. The reading is widely seen as a sign of market confidence in the pandemic-hit economy.

Analysts predicted more days of choppy trading to come, citing an absence of market events to vent the valuation pressure.

"With the earnings season far away and profit forecast left unchanged, the KOSPI was doomed to fall," Choi Yoo-joon, a researcher at Shinhan Financial Investment, said.

The local currency closed at 1,158 won against the U.S. dollar, up 2.3 won from the previous session's close, marking the highest since it closed at 1,157.0 won to the greenback on Jan. 15 this year. The won's rise occurred in tandem with the global weakness of the U.S. dollar.

Bond prices, which move inversely to yields, closed higher. The yield on three-year Treasurys lost 0.3 basis point to 0.904 percent, and the return on the benchmark five-year government bond slipped 0.1 basis point to 1.197 percent.