Chung received the testing at a community health center in central Seoul in the morning after a director general in the Prime Minister's Secretariat tested positive for COVID-19 earlier in the day, the office said.

Chung ended his self-quarantine following the negative test result. The office noted that Chung was not technically classified as a close contact of the patient, as the two had not met face-to-face since Sept. 16. Chung took the test as a precaution.

Following the test, the prime minister canceled the rest of his schedule for the day, including an inspection of virus prevention measures at a big grocery store in southern Seoul.

Chung's younger brother died earlier Tuesday and the prime minister may visit the altar in Jeonju, 240 kilometers south of Seoul, later in the evening.

The confirmed patient received the test Monday after learning that a person he met on Sept. 7 tested positive for the virus. 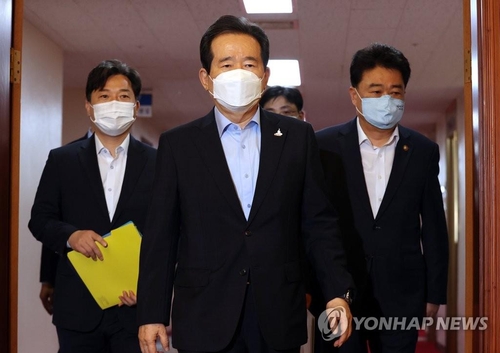