SEOUL, Sept. 22 (Yonhap) -- Despite COVID-19 having bogged down the global entertainment industry at large, the conversation and buzz surrounding K-pop on the social media platform Twitter has increased substantially in volume in the past year, according to data from the company Tuesday.

The number of K-pop-related tweets from July 2019 to June 2020 on the global social media platform reached 6.1 billion, up 15 percent from the 5.3 billion tally from a year ago, according to data compiled by Twitter Korea together with music startup Space Oddity's fandom analytics dashboard "K-pop Radar."

In celebration of roughly a decade in terms of K-pop's presence on Twitter, the company partnered with Space Oddity to conduct a comprehensive analysis of tweets surrounding 122 leading artists across 20 different markets to monitor how the social media platform was facilitating the conversation on K-pop.

How “K-pop” became global trend on Twitter, and the most-mentioned K-pop artist? 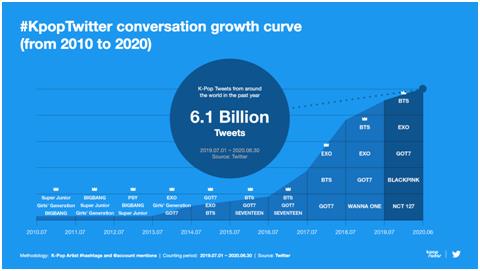 The analytics found that the United States has the most users who tweeted on the topic of K-pop, followed by Japan and South Korea. Indonesia, the Philippines, Brazil, Mexico and Argentina followed behind.

In terms of the volume of K-pop related tweets, Thailand came first, followed by South Korea, Indonesia, the Philippines, the U.S., Brazil and Malaysia.

In terms of songs, the top mentioned K-pop number was "Obsession" by EXO, followed by four BTS tracks -- "ON," "Boy With Luv (Feat. Halsey)," Black Swan" and "Interlude: Shadow."

The conversation surrounding K-pop on Twitter has apparently grown exponentially especially between late 2016 and the first half of 2018. BTS won its first Top Social Artist award at the Billboard Music Awards in May 2017, and EXO also opened its official Twitter handle in July of that year with the release of "Ko Ko Bop." 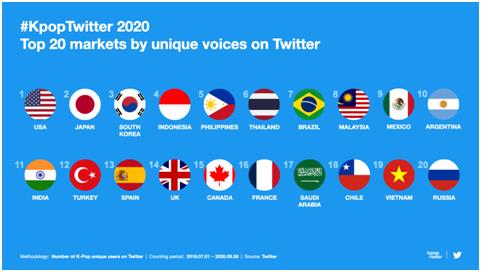 YeonJeong Kim, head of global K-pop partnerships at Twitter, stressed that the conversation of K-pop has not decreased at all on Twitter despite COVID-19 having prompted cancellations of concerts, world tours and fan meet-and-greet events.

"These fans, many who are young and based all over the world, are flocking to Twitter to join these fun #K-pop Twitter conversations to feel connected to a global fan community," Kim said.

Female solo artist Sunmi, who first debuted in 2007 as a member of Wonder Girls, explained that she often tried to send tweets mixing Korean and English for both her local and global fans. "I'm very happy that K-pop is finally receiving the recognition from around the world."

Hyungwon, singer of boy band Monsta X, said he tries to share photos of places on Twitter when the band is touring overseas.