WASHINGTON, Sept. 22 (Yonhap) -- U.S. President Donald Trump left out North Korea in his address to the United Nations General Assembly on Tuesday, marking the first time he has not mentioned the communist state in his four U.N. speeches.

In his about seven-minute speech, the U.S. president touched on the COVID-19 pandemic and various other issues facing the United States and the rest of the world but made no mention of the North amid stalled nuclear talks with Pyongyang.

It was the first time that Trump has skipped the North in a U.N. General Assembly address since taking office in 2017. Earlier this year, he also did not mention the communist nation in his annual State of the Union address.

In his first U.N. General Assembly speech in 2017, Trump warned the North of "total destruction" and called leader Kim Jong-un a rocket man amid heightened tensions in the wake of the North's sixth and last nuclear test earlier that month.

Even when U.S.-North Korea relations began to improve the following year, Trump did not fail to include North Korea in his U.N. speeches, either by praising the communist state for engaging in negotiations or urging it to do more.

In his second address to the U.N. General Assembly in 2018 that followed his historic summit with Kim in Singapore, Trump noted the U.S. and North Korea were working together to establish peace on the Korean Peninsula.

Last year at the U.N. General Assembly, he urged the North to denuclearize, saying the country will have limitless potential to develop and prosper once it does.

Trump and Kim held their second bilateral summit in February last year, but the meeting ended without a deal. Trump and Kim last met in June 2019 inside the Demilitarized Zone that divides the two Koreas. Their talks have since stalled.

Despite not mentioning North Korea at the world body Tuesday, Trump has daily recalled his meetings with the North Korean leader on his recent campaign trail, taking credit for preventing what he claims to have been an imminent war with the North.

Kelly Craft, the U.S. ambassador to the U.N., praised Trump for his engagement with the North and its leader.

"Americans held captive in North Korea have come home. There have been no new nuclear tests, no long range missile tests, a dramatic lowering of the diplomatic temperature in the region and an opening for a lasting agreement that brings peace to the (Korean) peninsula," she said while introducing Trump in his prerecorded address to the U.N. General Assembly.

North Korea has maintained a moratorium on nuclear and long-range missile tests since November 2017. 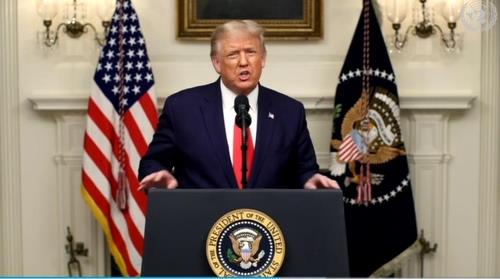