SEOUL, Sept. 23 (Yonhap) -- The main opposition People Power Party (PPP) announced a palette of red, blue and white as the colors to newly symbolize the party Wednesday, the latest in a series of efforts to revamp its image.

Kim Chong-in, interim leader of the main opposition party, announced the decision to reporters following a party meeting earlier in the day.

The change of campaign colors from the previous hot pink marks the conservative main opposition party's latest endeavor to reboot its image following the crushing defeat in the April 15 parliamentary elections.

Earlier in the month, the party gave up its previous name, United Future Party, to adopt the current moniker, People Power Party.

Kim, a former veteran lawmaker, took office as the party's caretaker leader in the aftermath of the election defeat and has scrambled to recreate the hawkish image of the party to reach out to a broader range of voters. 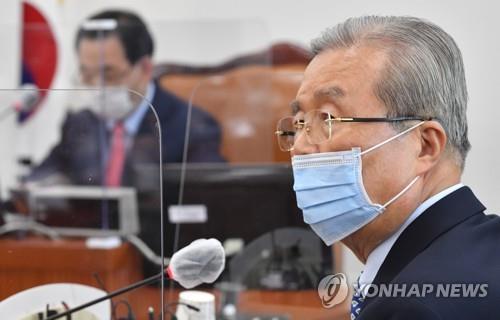