Tesla said its new cylindrical cells would reduce the cost per kilowatt hour by 56 percent and extend its electric vehicle range by 54 percent in coming years. 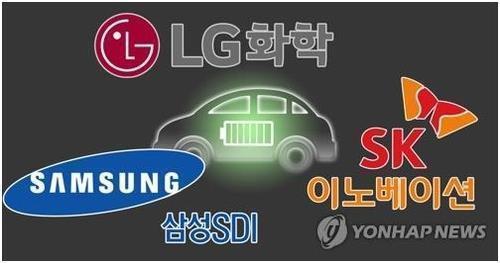 Tesla CEO Elon Musk tweeted Tuesday that he foresees significant shortages of battery cells in 2022 and beyond unless Tesla boosts output of its own cells.

"Tesla would reduce its reliance on battery suppliers, which in turn would make them competitors from demand-supply relations," an official of the South Korean EV battery industry said.

LG Chem, the world's largest supplier of EV batteries, is on track to boost its production capacity to 100 GWh by the end of this year before ramping up its capacity to more than 200 GWh by 2023, which is enough to supply batteries for about 3.4 million electric cars.

SK Innovation Co., another South Korean EV battery maker, has said it aims to boost its production capacity to 100 GWh by 2025.

Kim Kwang-jin, a researcher at Yuanta Securities Korea Co., said Tesla's proposed hike in battery output could be a symbolic figure, as it is nearly impossible to put in place massive manufacturing facilities of battery cells in a short period of time.

Musk has missed some of his own deadlines after making ambitious goals.

Hwang Sung-hyun, a researcher at Eugene Investment & Securities, said Tesla did not unveil technology innovations that could threaten South Korean manufacturers of EV batteries on its Battery Day.

Hwang said Tesla's Battery Day is meaningful in that it displayed Tesla's long-term vision, but it eased uncertainty on South Korean EV battery makers in the short term.