SEOUL, Sept. 23 (Yonhap) -- The next U.S. administration should come up with a new approach for North Korea, a former U.S. diplomat for Asia said Wednesday, stressing that sanctions have done little to steer Pyongyang in a positive direction.

Susan Thornton, former acting assistant secretary of state for East Asian and Pacific Affairs, made the remark during a virtual seminar as stalled nuclear negotiations between Washington and Pyongyang have shown no signs of resuming anytime soon.

"Sanctions issues have not contributed to positive momentum. Whoever wins the U.S. election ... there is going to have to be a rethink to the approach to North Korea," she said during the seminar hosted by the Sejong Institute and the Council on Foreign Relations.

Thornton said that the North's situation appears to be "not good" but "it's apparently not bad enough to drive North Koreans to the negotiating table in the wake of Hanoi," referring to the no-deal summit between U.S. President Donald Trump and North Korean leader Kim Jong-un in Hanoi last year.

Even if Trump is reelected, North Korea will likely have to work hard to get his attention regardless of the "good relationship" Trump and Kim have boasted of, given Trump's unpredictable character and that North Korea could be less an important issue to him, Thornton noted.

"I don't know how the North Koreans will force him to take it up again, he's been pretty content to leave it where it is. That's the quandary for North Korea, how to get his attention without going too far," she said. 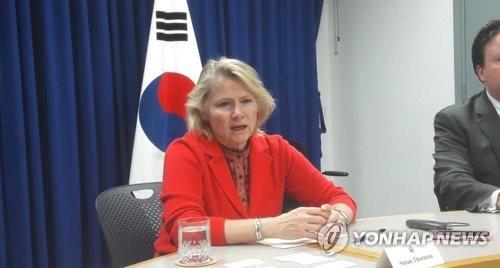