SEOUL, Sept. 24 (Yonhap) -- South Korean President Moon Jae-in had phone talks with Japanese Prime Minister Yoshihide Suga on Thursday, during which he proposed that the two countries seek an "optimum" resolution to the wartime forced labor issue at the center of soured bilateral relations.

Moon noted there are different positions between the two sides on the issue of South Korean victims of Japan's World War II forced labor but expressed hope that Seoul and Tokyo will explore an "optimum" solution that can be accepted by their governments and all other parties concerned, according to Cheong Wa Dae spokesman Kang Min-seok. 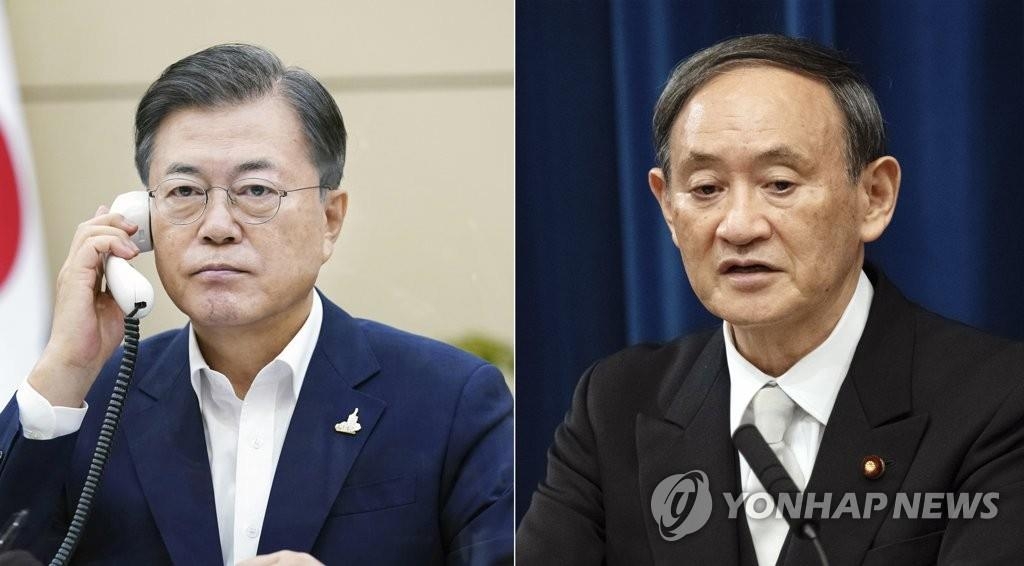 Moon suggested they accelerate "communication efforts" to resolve pending issues "with a new mindset" on the occasion of Suga's inauguration as Japan's prime minister, Kang said.

Suga agreed to "encourage" dialogue efforts to that end during the conversation that lasted 20 minutes, he added.

Moon said South Korea and Japan are not only the closest neighbors sharing basic values and strategic interests but also partners in creating peace and prosperity in Northeast Asia and the world.

Suga said he hopes for the establishment of bilateral ties in a "forward-looking" way together with Moon.

The two also agreed to work together to overcome the COVID-19 crisis and cooperate more closely on the Korea peace process.

Suga mentioned the issue of Japanese nationals abducted by North Korea decades ago, and Moon agreed to support Tokyo's campaign to resolve it.

It marked their first talks since Suga took over from Shinzo Abe, who resigned for health reasons.
(END)